The unemployment rate is down. Jobs are being created.  So why do Americans in the latest Economist/YouGov Poll feel so negative about the state of the economy?

But the negativity is more than just a reaction to the presidential campaign: Americans believe the country is on the wrong track, and doubt the economy is improving. Barely half think the unemployment rate is lower now than it was when President Obama took office in 2009 (it was 4.9% in Friday’s announcement, down from about 8% when the President was inaugurated). For the first year of his Administration, the jobless rate kept growing, rising to 10% later in 2009. But for the last year or so, the rate has hovered around or below 5%. The number of new jobs created since the President took office has surpassed the number lost in the Great Recession. 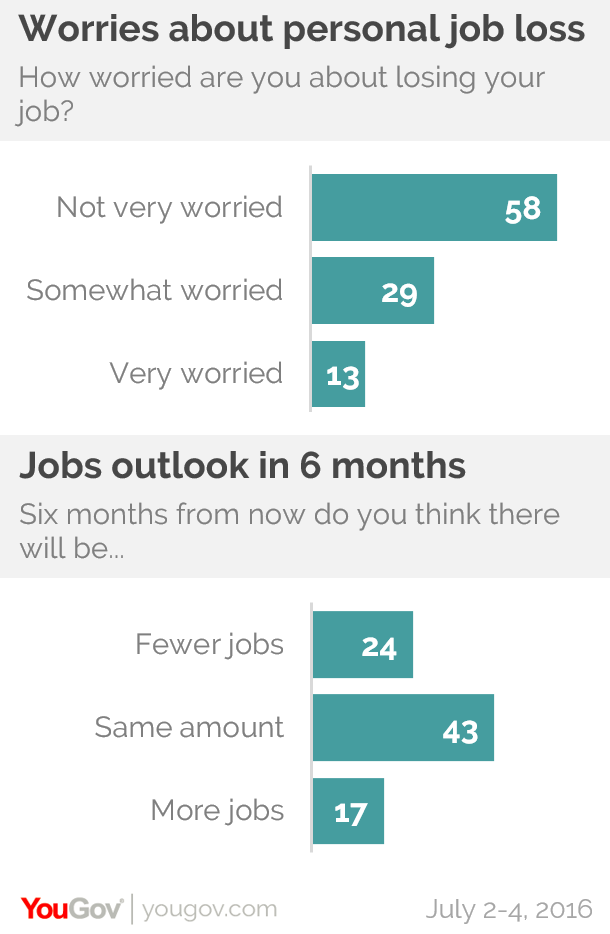 But there is not a lot of belief that jobs are increasing. Americans are more likely to think there will be fewer jobs in six months than believe there will be more jobs, and even more expect no change at all. 13% of workers say they are very worried about losing their own jobs.

More critical, perhaps is that many Americans don’t look at the unemployment rate as especially meaningful. Barely half say it is even a “fair” indication of the health of the economy. Only one in four rank it as “good” or better.

There is no single “good” measure. Asked to choose among four options, just about as many think “prices” are the best indicator as say the unemployment rate is. Others say their own financial situation is the best measure, and one in ten cite the stock market.

The problem stems, in part, from a belief that things aren’t as good as they could be. More important, things aren’t as good as they should be. Americans have long memories about financial crises. The Great Depression affected economic behaviors among those who lived through it for a long time – and even carried over to the rhetoric and the behaviors of many of their children. Similarly, the financial crisis and Great Recession of 2008 is still with many. 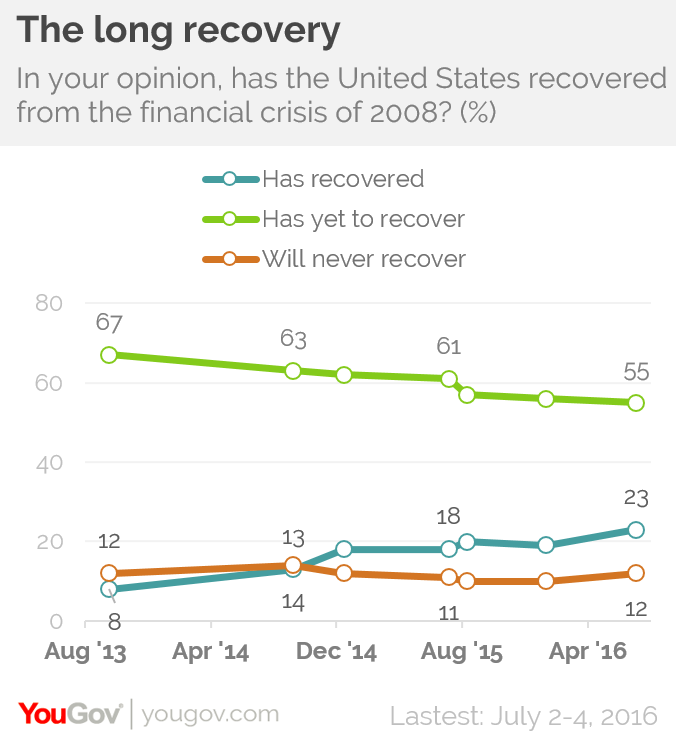 When Americans are asked whether that crisis is over and the country has recovered from it, two out of three say it has not – with one in five of those (12% overall) saying it will never recover.

While the long-term confusion about the relevance of the unemployment rate and other economic measures and the depressing impact of the 2008 crisis amplify economic concerns, some of the blame can be given to the campaign, too.

More than one in four have unfavorable opinions about both candidates. 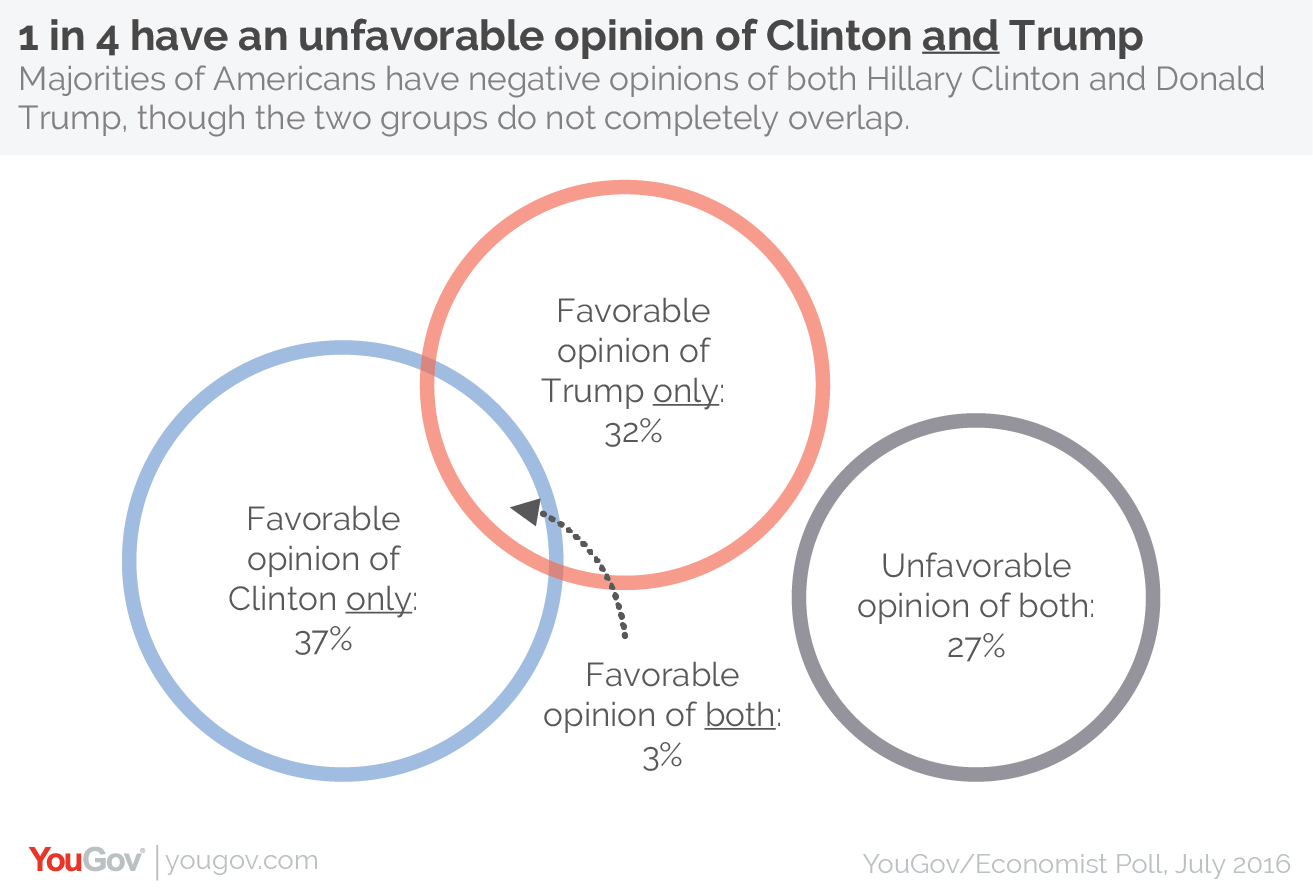 Those who describe themselves as very liberal or very conservative and those who have yet to decide how they will vote in the fall are even more likely to have negative opinions about both.

We know that partisanship plays a role in how people look at the economy. In other words, what economists usually think of as objective measures aren’t always universally believed. If a Democrat holds the Presidency, Republicans become less likely to think the economy is doing well, and vice versa. A change in the incumbent’s party turns economic opinions around. For the last eight years, Republicans have graded the economy more negatively than Democrats, while the reverse was the case during the Presidency of George W. Bush.

We are nowhere near the negative assessments of the economy seen in 2011, after two years of near double digit unemployment, slow growth, a debt crisis, and the threat of a government shutdown. Yet since last summer, there has been a shift downwards in perceptions about the state of the economy. Fewer now say it is getting better, more say it is getting worse. 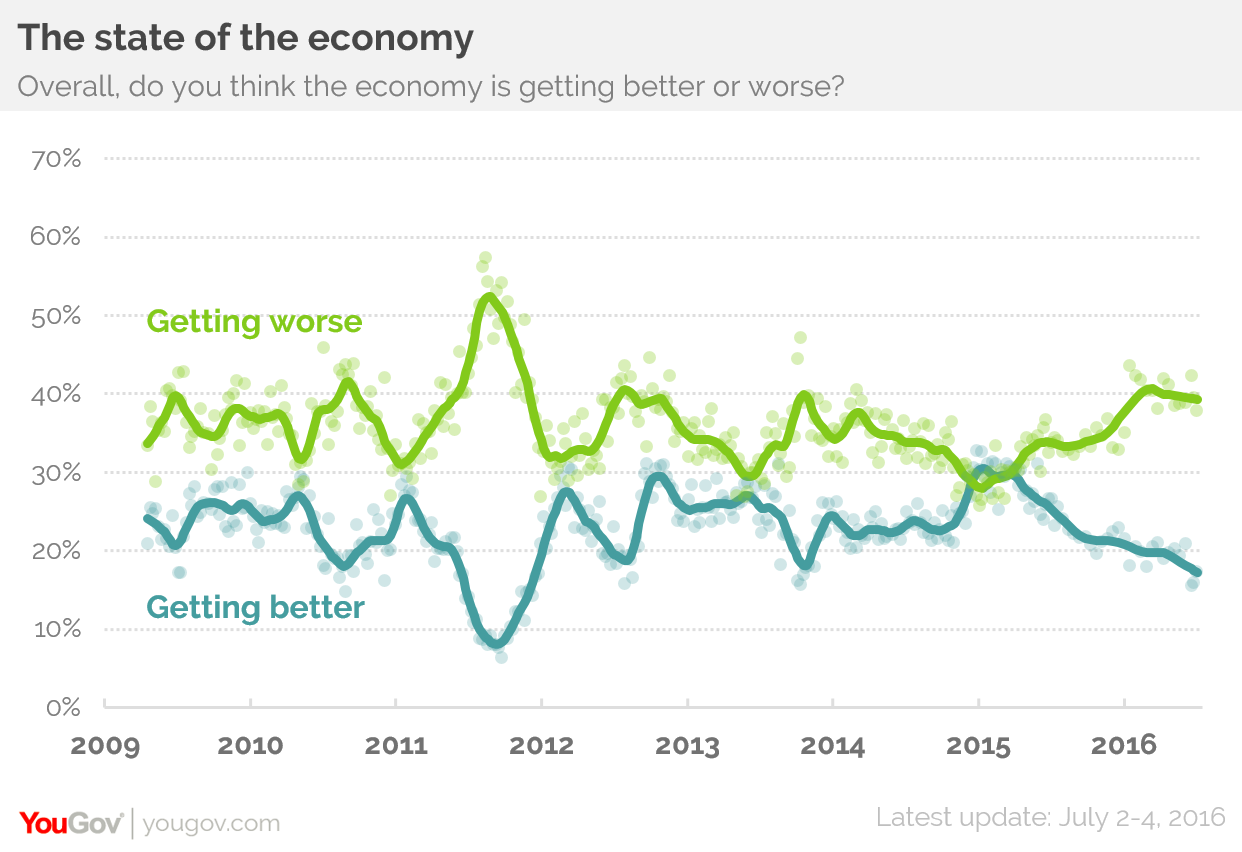 The biggest change is among Democrats. The competitive race between Clinton and Vermont Senator Bernie Sanders changed Democrats when it comes to evaluating the economy. The percentage of Democrats saying the economy is getting better has been cut nearly in half in the last year, down from 48% a year ago to 28% today. 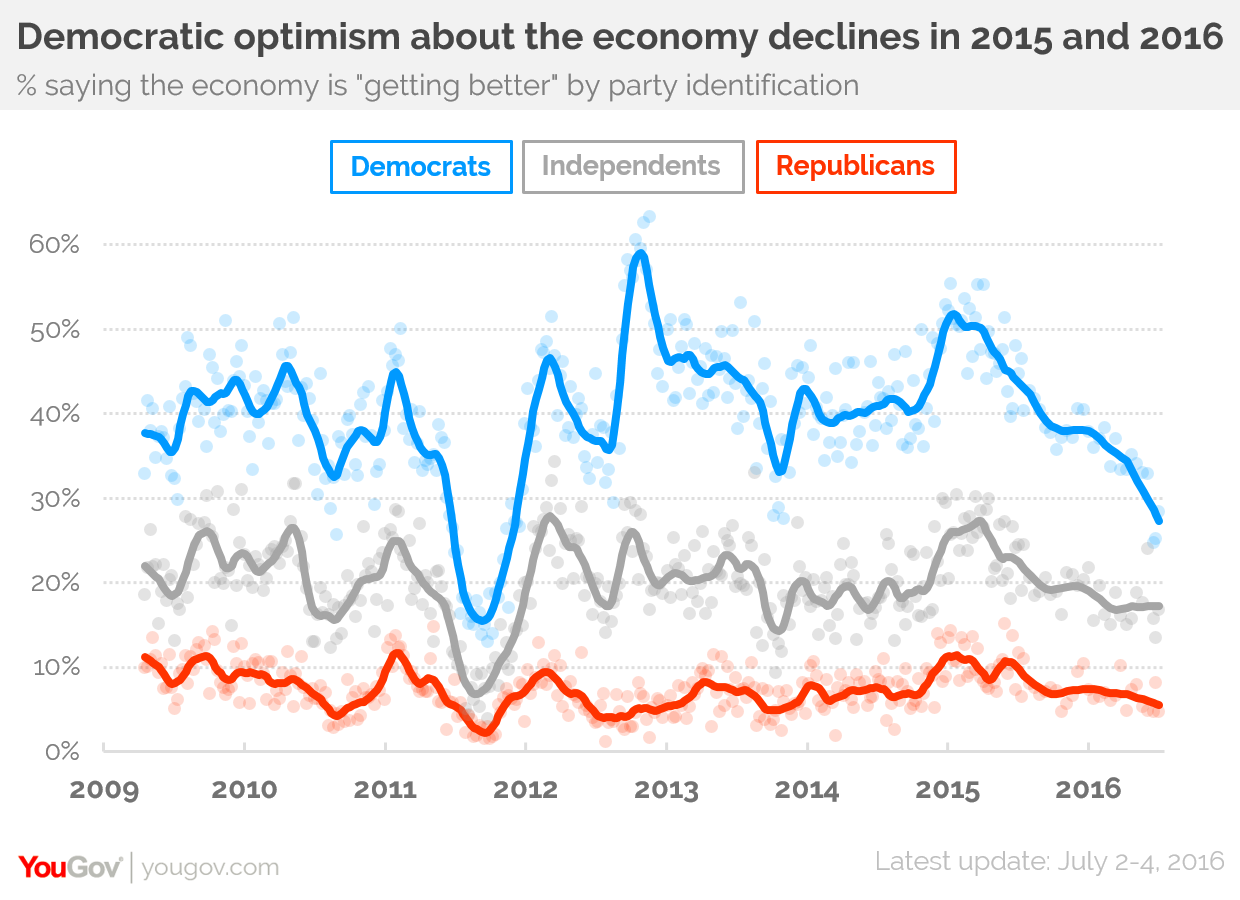 Although Independents and Republicans are even more negative, as they have been for the past eight years, their opinions have changed little since mid-2015.  Sanders’ focus on income inequality, the minimum wage and other economic problems may have taken a toll on Democratic optimism. His supporters as nearly twice as likely as Democrats overall to think the economy is getting worse.