Many Clinton voters expect that there is a good chance that recounts will change the election result, but few Trump voters agree

Green Party candidate Jill Stein’s recount request gets public support in the latest YouGov Poll —although there are differing points of view of their value, depending on which side you are on.

Some Democrats and Clinton voters hold on to the hope that the recounts will show that Democrat Hillary Clinton really carried the states of Michigan, Wisconsin and Pennsylvania, three close states that gave Republican Donald Trump a majority in the Electoral College.  Republicans and Trump voters overwhelmingly disagree.  But Republicans do believe that the recounts can help convince people that Trump really did win the election; Democrats are more likely to disagree with that. 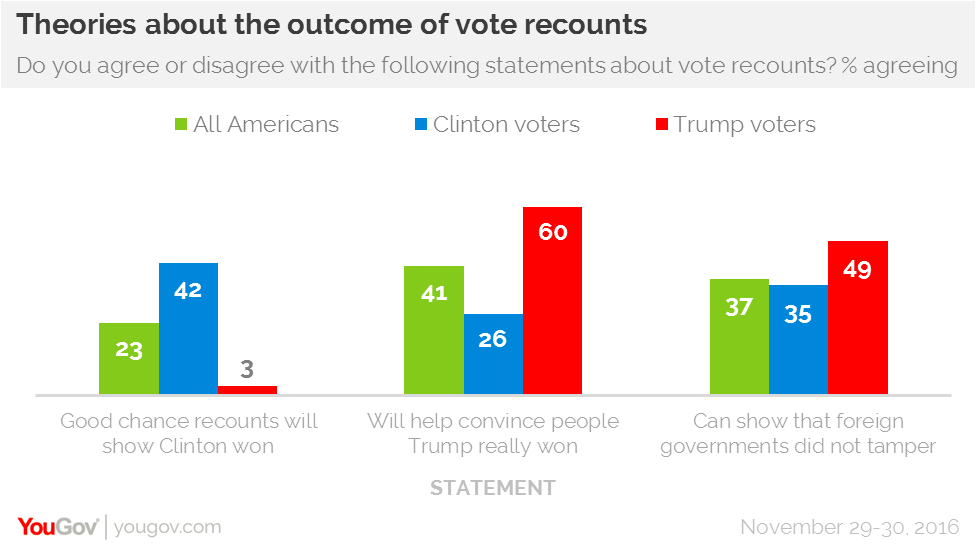 Both groups are less sure the recounts can demonstrate that foreign governments didn’t tamper directly with the election, although Trump supporters are more hopeful that they will.

There is one area of agreement.  While the recounts have been requested by Jill Stein, and Clinton campaign lawyers will participate in the recounts, both Clinton and Trump voters think that if the shoe were on the other foot, and Trump had won the popular vote but not the Electoral College, he would have been doing the same thing, asking for recounts in closely contested states.  Although more Clinton voters that Trump voters believe this, a plurality of Trump voters admit this would have likely happened. 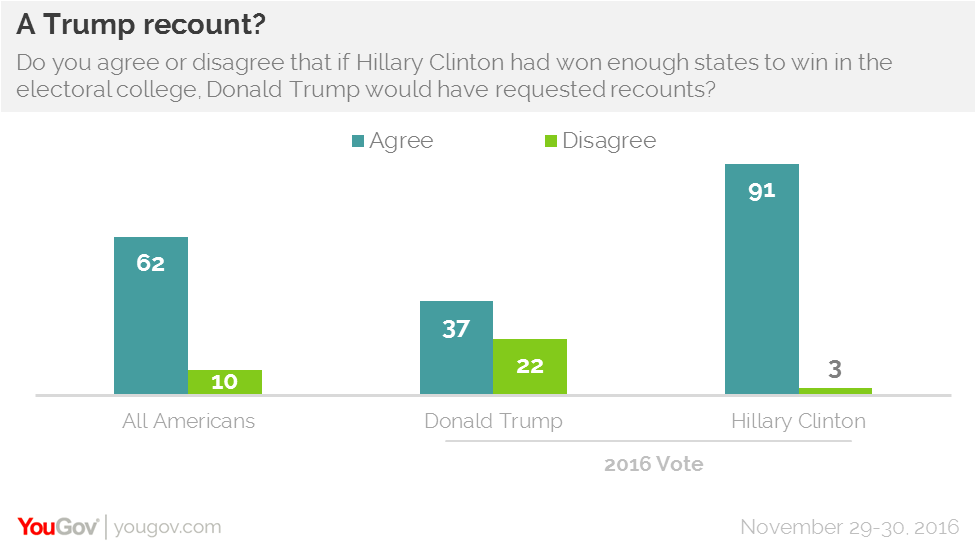 Donald Trump did claim that millions of votes were cast illegally and that without them hew would have won the popular, too (as of now, Clinton leads in the national popular vote totals by more than 2 million votes).   Trump later criticized CNN when it asked him for evidence.   While more Americans don’t believe Trump’s claim than believe it, it does resonate with Trump’s own voters.  Nearly half say, yes, millions of illegal votes were cast. 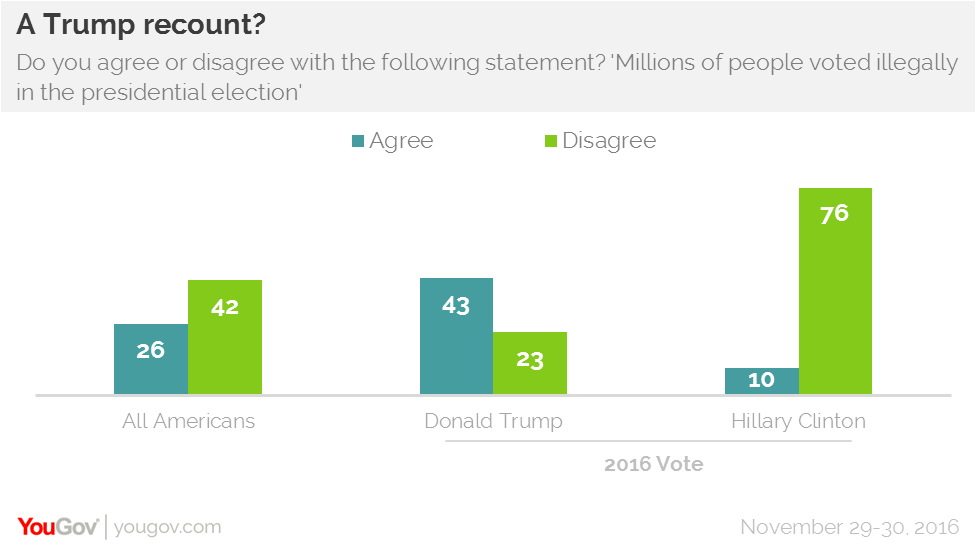 In addition, 82% of those Trump voters who believe there were millions of illegal votes agree with their candidate and say that without those “illegal” votes, Trump would have won the popular vote, too.

But was the election “rigged?”  In the weeks before November 8, Trump claimed it would be.  Afterwards, by nearly two to one, Americans doubt it was.  That’s particularly true for Trump voters, 70% of whom say it wasn’t rigged.  Clinton voters are less sure, though by a narrow margin, they agree it was not. 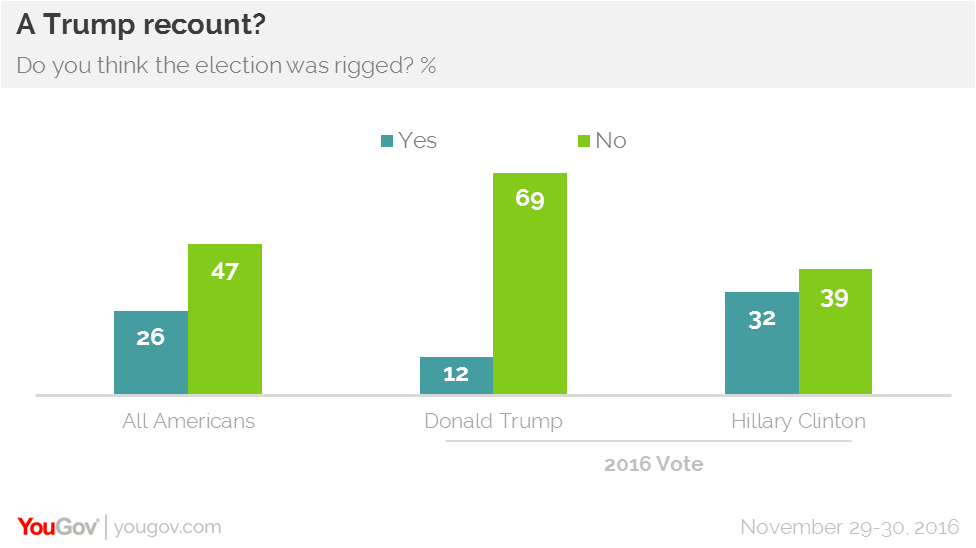 As for the Electoral College, polls throughout the years have suggested that Americans of all political points of views would like to get rid of it and elect presidents by the national popular vote.  But that’s only true when there isn’t a split decision as there was this year.  After the 2000 election, when Democrat Al Gore held a half a million vote lead nationwide but lost Florida, and with it the election, to George W. Bush, Democrats wanted to abolish the Electoral College while Republicans did not.  The same is true this year, three weeks after the election.  71% of Clinton’s voters would abolish the Electoral College, while 65% of Trump’s voters want to keep it. 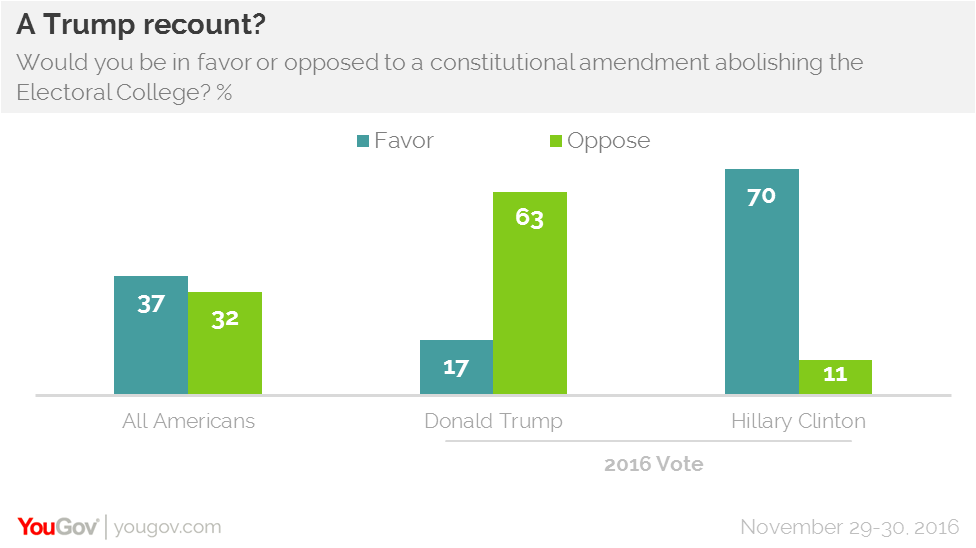 The recounts wouldn’t have happened without Stein’s efforts and her successful crowdfunding.  But Stein efforts aren’t helping her own image.  43% have an unfavorable opinion of Stein, more than twice as many as are favorable towards her.  This is not much different from what voters thought before the election.  However, unfavorable opinions of Stein among Trump supporters have jumped 30 points, from 46% then to 76% now.   Clinton’s voters were negative then, now they are evenly divided