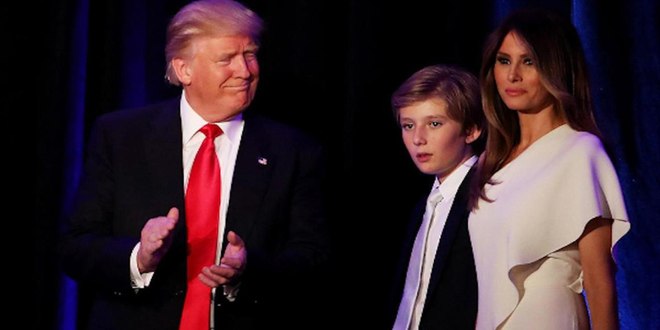 Optimism for Trump's presidency is notably lower than in prior elections

Even voters who supported Donald Trump aren’t sure the country is headed in the right direction – and while they like his proposals, their preferences don’t match those of the public at large, a public which is unclear about what Trump will accomplish in office and opposes most of his promises.  Two-thirds of voters in the post-election Economist/YouGov Poll said they – like many in the media – were surprised by the outcome, so expectations of what a Trump Presidency would be like are still being formed.

Looking ahead, Trump may not enjoy any sort of honeymoon at all.

Both before and after this election, Americans believed the country was on the wrong track, and by a more than two to one margin.  They still say it is, and in an unusual show of party unity there is no difference between those who voted for Trump and those who favored his opponent, Hillary Clinton on this question.  Before the election, Clinton voters saw the country as headed in the right direction, while Trump voters strenuously disagreed. 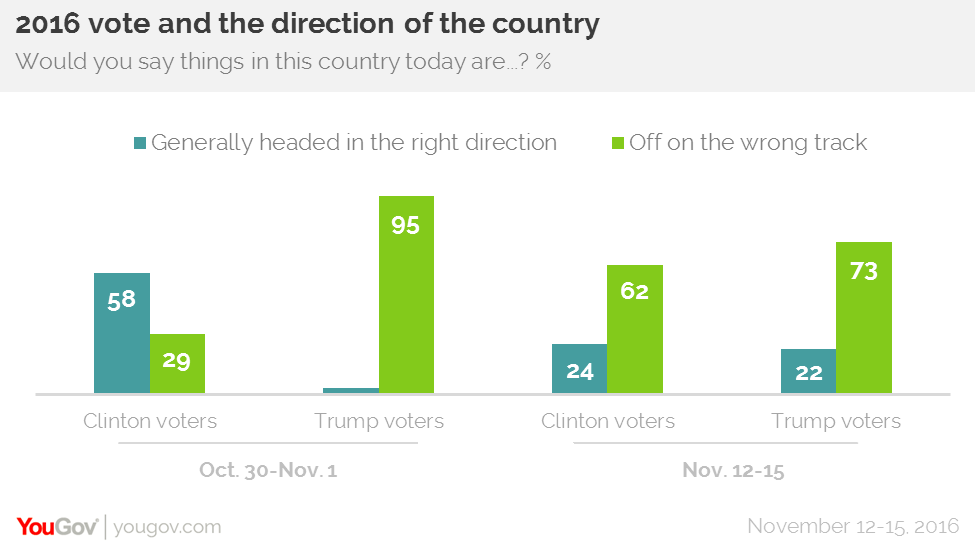 The shock of the election (even half of Trump’s own voters said they were surprised at his victory) may have tempered future expectations, after a campaign that was mired in attacks between the nominees.  For the most part, minds were made up long before the election: only 9% of those who voted for Clinton ever considered voting for Trump; 13% of Trump voters said they considered supporting Clinton.  And registered voters who did not cast a ballot last week also split closely between the two major party candidates, with a small lead for Clinton.  Of course, their votes would have made a difference in the outcome only if those voters lived in the few critical, close states that put Trump over the top in the Electoral College vote.  Here is an analysis of the difference between the final YouGov polls and the election results.

There are other Trmp weaknesses.

Instead, 55% say it is likely he will use the office to enrich his family and friends.

On the policy side, the expectation is that taxes will be cut, and Obamacare will be repealed

Trump voters were for the most part on the same page as their candidate when it came to his campaign promises: two in three Trump voters want to build a wall on the Mexican border, appoint a Special Prosecutor to investigate Hillary Clinton, and deport illegal immigrants.  Even more of his voters want him to ask Congress to repeal the Affordable Care Act on Day 1, renegotiate the Trans Pacific Partnership and the North American Free Trade Agreement.  Most see no need for Trump to release his tax returns, even after an audit is completed. 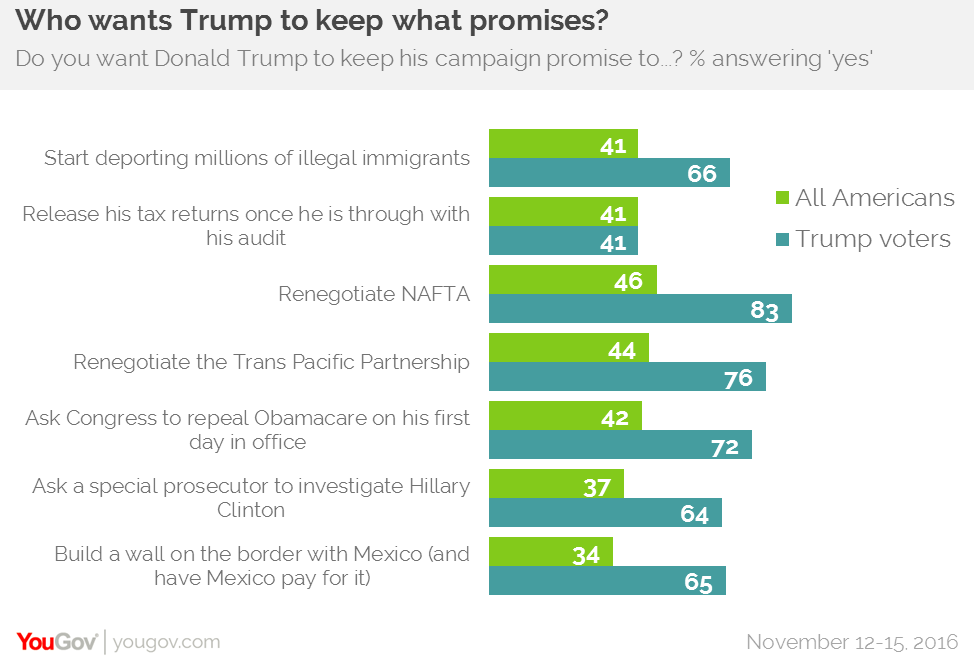 None of these promises receives support from a majority of the American public.

For the most part, Trump voters expect the President-elect to keep those promises.   And Americans overall expect him to keep at least one: half the country expects there will be fewer illegal immigrants in the United States four years from now than there are today.