As the 2016 presidential election heads into its last months, Americans seem more unsettled about it than they were before the long Labor Day weekend.

Fewer registered voters in the latest Economist/YouGov Poll say they have a good idea how they will vote in November than said they did a week ago, and the race itself seems more up in the air now than it was all summer.

Among those least likely to be sure of their vote are the groups both candidates would like in their corner -- one in four moderates and independents are not sure how they will vote.  One out of every three voters under the age of 30 are not yet settled on their vote, as are 28% of those between the ages of 30 and 44.

Women have given the Democratic nominee, Hillary Clinton, double-digit leads in previous polls, but not this week.  And they are more likely than men to say they have not yet decided for whom to vote.  In this poll, Clinton runs only four points ahead of Republican Donald Trump among women (down from last week’s ten-point margin), while men are evenly divided.  Among all registered voters, Clinton has only a two-point edge this week in both a four-way and a two-way contest.

When those who favor some other candidate, or who are undecided are asked to choose between Clinton and Trump, the New York businessman moves barely ahead with men, and Clinton gains a point with women.

Women admit to being less sure of their vote than men do.  That gap has widened in the last week.  The share of women who claim they know what they will do in November has dropped eight points.  But men have become less certain as well. 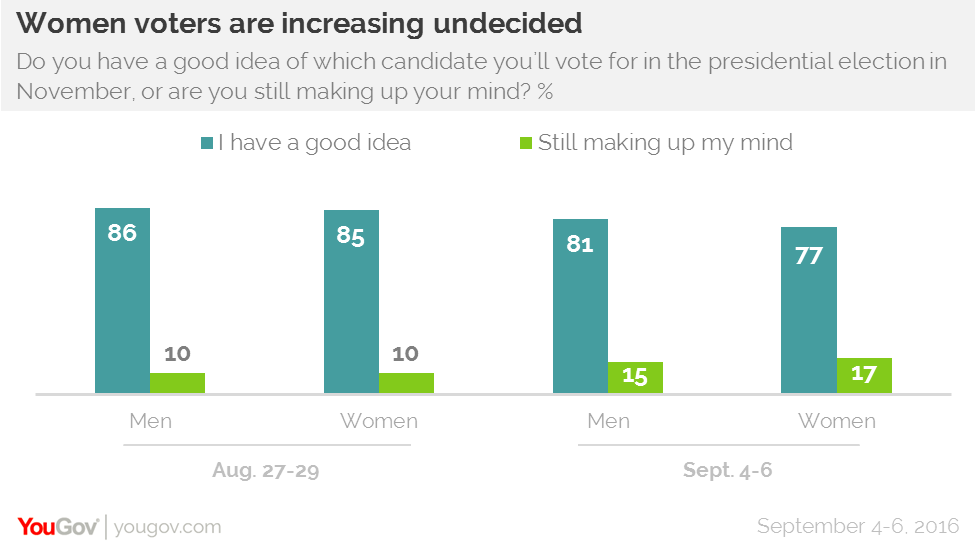 What has happened in the last week?  Both candidates have confronted campaign problems: Clinton over questions about her email while Secretary of State and over the behavior of the Clinton Foundation and Trump about the quality of his diplomatic skills.  Last week, more than half of registered voters thought the Clintons had personally profited from their foundation.  This week there seems to have been a new issue – her health.  The percentage who think Clinton is in good enough condition to serve effectively as President for four years dropped from last week.  For Clinton, the problem is mostly among those supporting Trump: only 15% of them say she is healthy enough to serve.  Trump voters who say she is not healthy enough rose nine points to 72%. 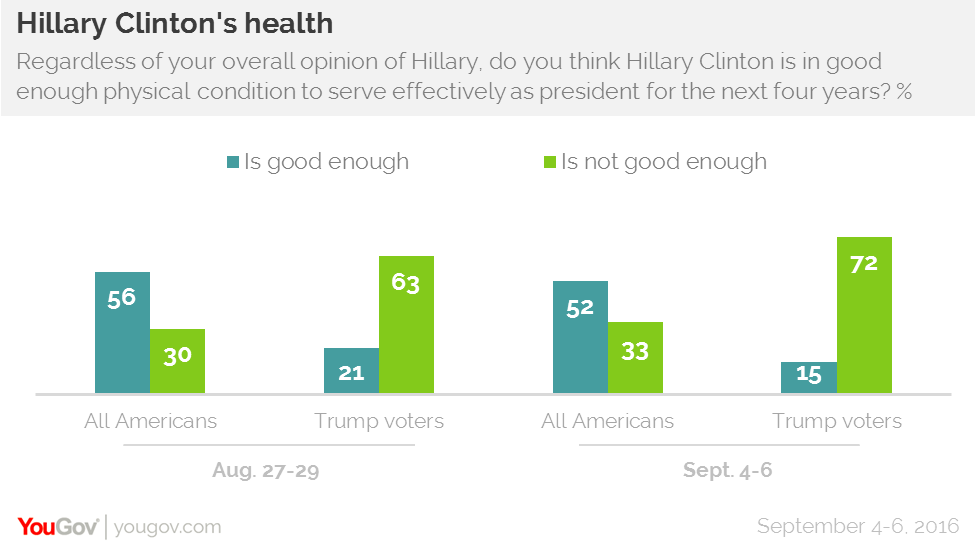 But Trump has issues as well.  In last week’s poll, six in ten registered voters believed that if he became president, he was likely to get the U.S. into a war.  Less than half said that about Clinton.

This week’s poll suggests that Trump’s overtures to African-Americans and the mixed signals he has been giving on immigration reform haven’t helped his standing with either blacks or Hispanics.  Only 5% of blacks think that when Trump talks about improving the lives of African-Americans, he really means it.   A majority thinks Clinton does mean it.

More than half of blacks say Clinton cares a lot about the needs and problems of black people – only 4% think Trump does.   Most blacks and Hispanics are ready to label Trump as racist and bigoted – in some cases, to an even greater degree than they did last week.  81% of African-Americans in this week’s poll say Trump say the word “racist” describes Trump, up from 68% last week.  73% of Hispanics agree.  Few see Clinton that way.

When it comes to the issue of immigration, there are doubts about both candidates.  Four in ten have confidence in Hillary Clinton’s ability to deal wisely with immigration, but even more do not.  But even fewer feel confident in Trump’s ability to handle immigration. 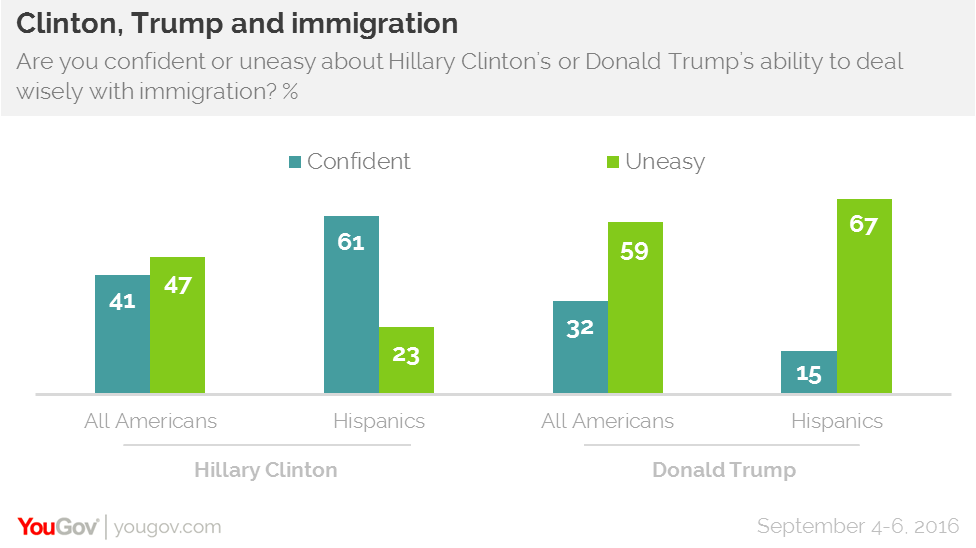