Trump's support has risen from 35% to 38% among registered voters, though he still trails Hillary Clinton by four points

With two well-known (and generally disliked) presidential candidates, changes in voting support are likely to come only slowly and incrementally.  And the latest Economist/YouGov Poll, though suggesting an upwards tick for Republican Donald Trump, underscores this point, with some of the positive changes coming mostly from his supporters. 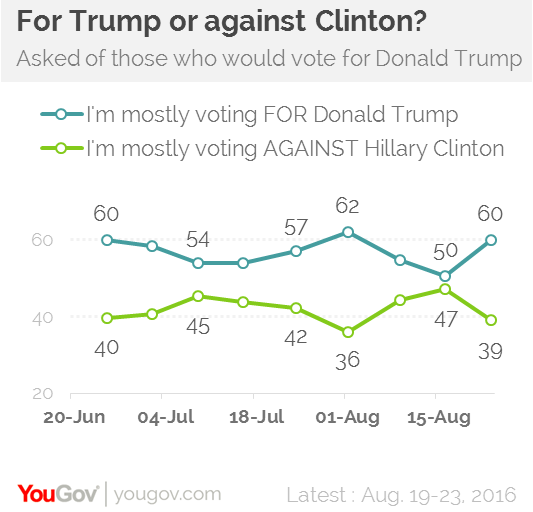 Last week, nearly half of Trump’s supporters characterized their vote for him as being one that was being cast against Democrat Hillary Clinton, and not one that was mostly for him.  This week, Trump’s voters clearly feel better about him: six in ten say they are voting for the New York businessman.

Political independents who are supporting Trump are more likely to say they are mainly voting against Clinton.

Clinton’s supporters remain committed positively to the former Secretary of State.  Six in ten of them say they are casting their vote for her.  However, 56% of those who favored Vermont Senator Bernie Sanders for the Democratic nomination, say their vote is mostly against Trump. The youngest voters, those under the age of 30, who were more likely to favor Sanders during the primary season are also more likely to be voting against Trump. 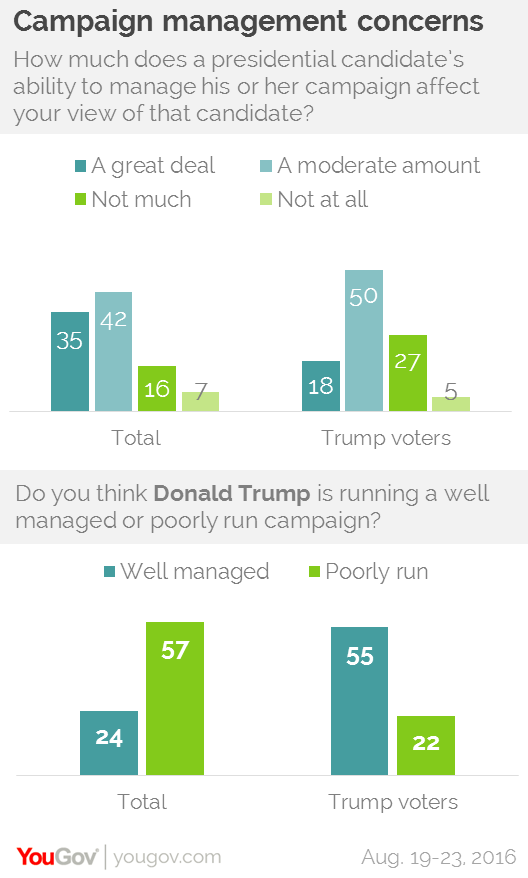 This was perhaps a good weekend for Trump. His latest change in campaign leadership didn’t make the public any more likely to think he was running a well-managed campaign (in fact, it may have added to the negative assessment: only 24% think he is this week, down eight points from the end of July), but for many voters that may not matter all that much. Only about a third say that how a candidate runs his or her campaign would matter a great deal in their vote choice.

Trump’s supporters are willing to overlook his campaign’s problems (and a majority of them say the campaign has been well-managed). Only 18% of Trump voters think a campaign’s management matters a great deal.

The current poll gives Clinton a four-point lead over Trump in the four-candidate contest. Last week Clinton led by six. And Trump gains a little when those who don’t choose either major party candidate at first are asked to choose between them.

Trump has picked up support from Republicans, something he needed to do. Last week, just 75% of Republicans said they would support their party’s nominee. This week, 84% say they will vote for Trump, about the same percentage as Democrats who say they will support Clinton. 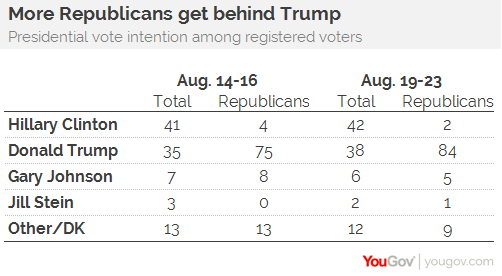 Trump also runs extremely well with military veterans – leading Clinton among veterans by about two to one, 55% to 28%. 83% of veterans are male, and about half are 65 and older. Those are two groups that Trump generally does better with than he does in general.

The negative images of the two candidates are clear and consistent. While Clinton fares slightly better among the public overall than Trump does, that gap narrows when one looks only at registered voters – the group that will be deciding which one becomes the country’s next President. 58% of registered voters this week have an unfavorable view of Trump; 56% an unfavorable view of Clinton. 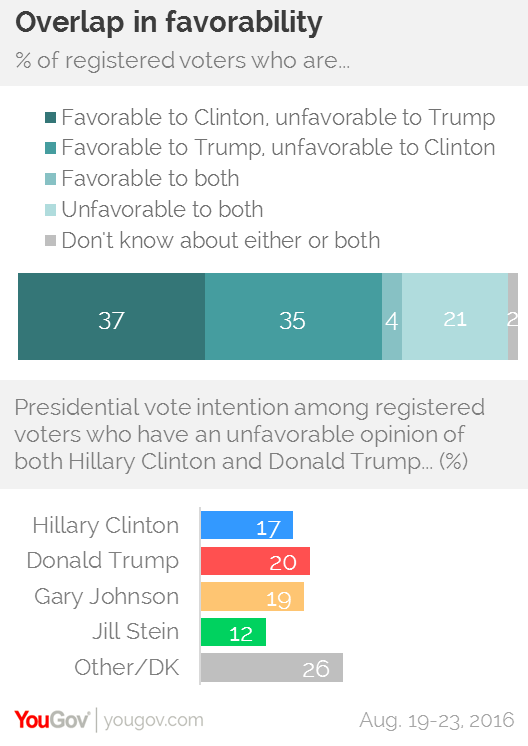 Not surprisingly, those who dislike both major party nominees are the most likely to favor other candidates. Only seven percent in that group say they will not vote at all, despite their distaste for both Clinton and Trump. Just about one in five each will vote for Clinton, vote for Trump, vote for Libertarian Gary Johnson, or say they remain undecided for now. Green Party candidate Jill Stein Dgets slightly less support.