Following the end of the Democratic National Convention, Clinton has made gains with men and independents

Hillary Clinton emerged from last week’s Democratic convention with a boost in the Economist/YouGov Poll, as well as increased belief in her capability for the job of President, at least when she is compared against her GOP rival, Donald Trump.  In a four-way contest, Clinton now leads Trump by five percentage points. 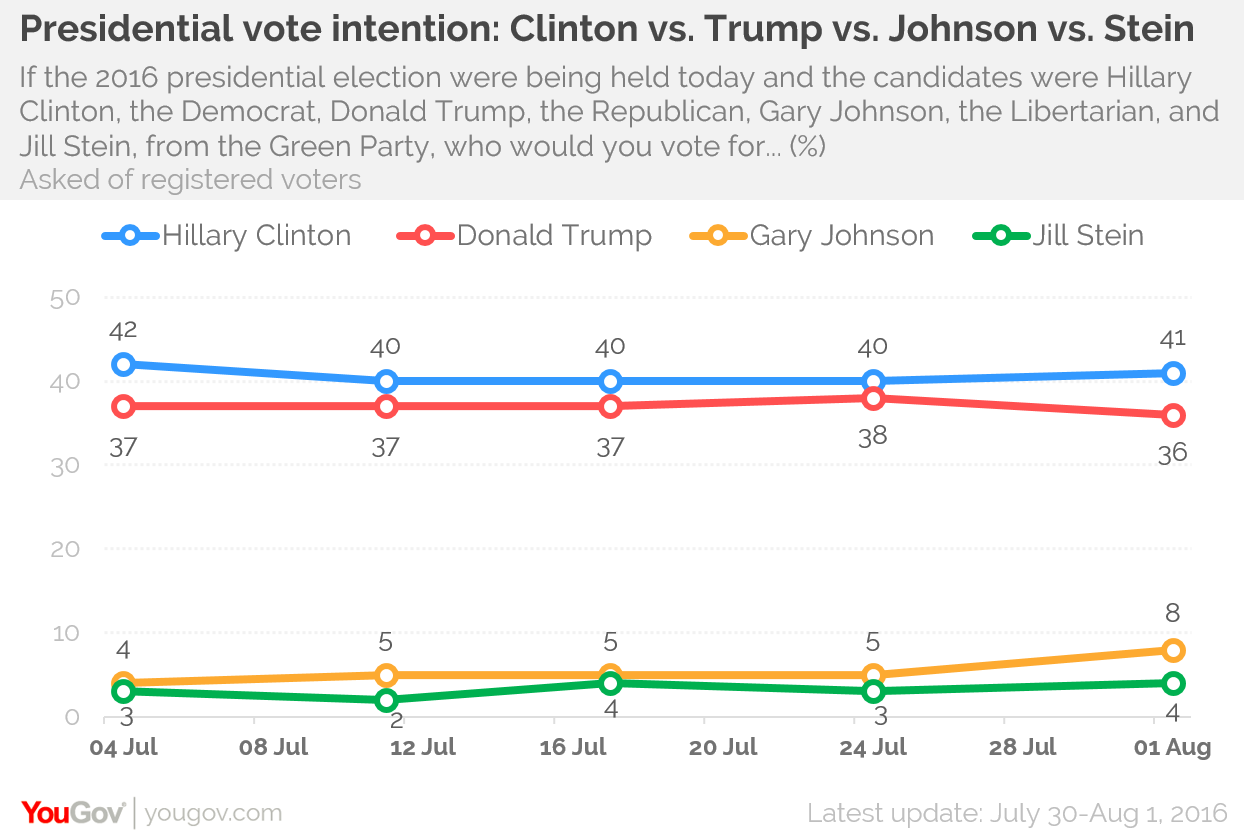 Clinton made gains in the last week among men and independents. Last week, after the Republican Convention, men gave Trump a 10-point lead.  That lead has now been cut in half.  Clinton continues to hold a double digit lead with women.  This week, she has the support of 45%, while just 32% of women choose the New York businessman.  Political independents are closely divided – Trump holds a three-point edge with them now. Last week, after the Republicans Convention, he led Clinton with independents by double digits.

Clinton maintains a lead (though slightly smaller) when those who now choose other candidates or have no preference are asked to choose between Trump and Clinton.

Part of Clinton’s gains may have to do with the better reception for the Democratic National Convention. Those who saw any part of the Democratic convention overwhelmingly judged it as “well-managed.” 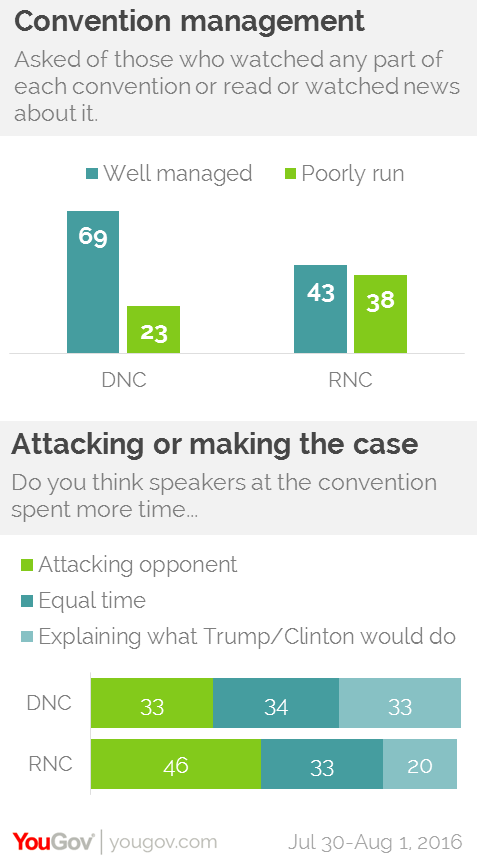 Those who saw the Republican meetings the previous week were less positive about the way it was run. (There is also a big difference in how Americans judge the campaigns in general: 56% think Clinton is running a well-managed campaign, while only 32% say that about Trump’s campaign.)

In addition, the viewers saw the Democratic gathering as focusing both on explaining Hillary Clinton’s positions as spending time attacking Donald Trump. Twice as many viewers found the Republican convention focused on negative attacks on Clinton than saw it as explaining Donald Trump’s policies.

Audiences for the two conventions were different, of course. Democrats were more likely to watch the Democratic event, Republicans the GOP convention. Those who watched each candidate’s speech were generally positive about it. 52% of Clinton speech viewers described her speech as excellent or good; last week 42% of Trump speech viewers said that about his speech. The big difference viewers saw was in terms of tone. Those who watched Clinton were three times as likely to think Clinton’s acceptance speech was mostly optimistic as to say it was pessimistic; the perception of Trump’s speech were only narrowly optimistic. 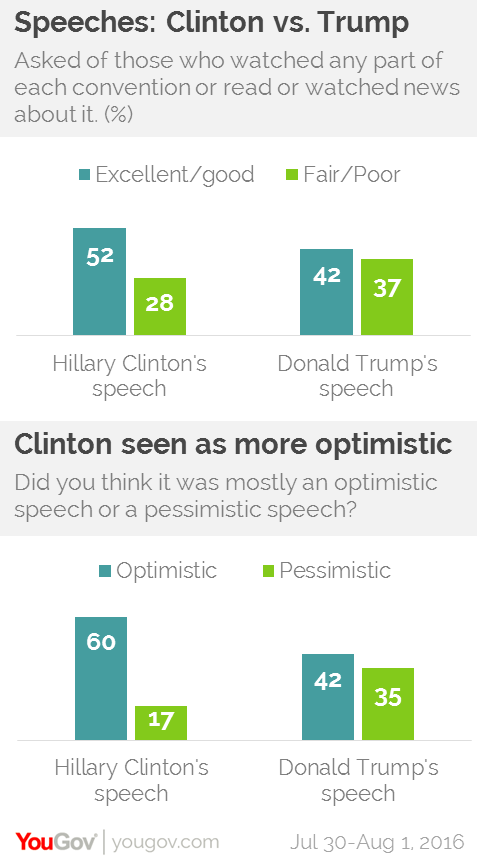 There were better-rated speeches at the DNC. Two-thirds of viewers rated First Lady Michelle Obama’s speech as excellent or good, 60% saw President Obama’s speech that way. But more ranked Clinton’s speech highly than said that about both the current Vice President’s and the one by the man who would like to succeed him, Tim Kaine.

Clinton’s overall favorability ratings changed little after the convention. But nearly twice as many of her supporters now say they will be voting for her and not against Trump. One group of Clinton supporters who are not really on the Clinton bandwagon are the Democratic primary voters who favored the nomination of Vermont Senator Bernie Sanders.  Sanders voters who now say they will vote for Clinton (still only about half of them in the four-way contest) see their support for Clinton as a vote against Trump. However, Most Sanders supporters approve of their candidate’s endorsement of the former Secretary of State.

Clinton also made gains when it comes to a series of presidential qualities. Americans are nearly twice as likely to say she is qualified for the job as to think that about Donald Trump. She has a 21-point lead on being ready to be Commander-in-Chief.  And she now has a 14-point lead when it comes to handling terrorism (up from one point last week), and a nine-point edge on handling the economy (the two candidates were evenly matched on that last week). 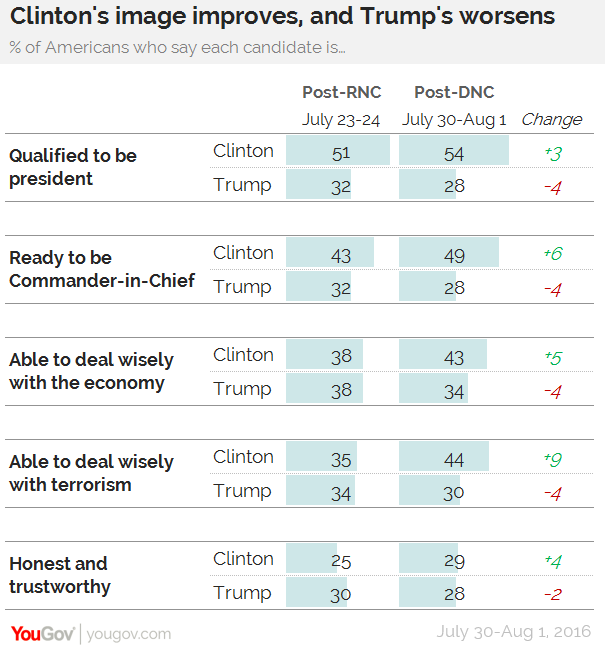 Clinton’s big weakness remains one: 58% say she is not honest and trustworthy. But just as many view Donald Trump that way.