Donald Trump’s final decision on his GOP running mate could be one between someone unknown to most Republicans or someone popular with Republicans but unlikely to reach out to win support from those already uncommitted to the party.   But the latest Economist/YouGov Poll gives the presumptive Republican nominee some clear guidelines when making his selection among the three men who appear to be his finalists.

And this is a good time for him to be choosing.  The public scolding Democrat Hillary Clinton received from FBI Director James Comey may have damaged her. 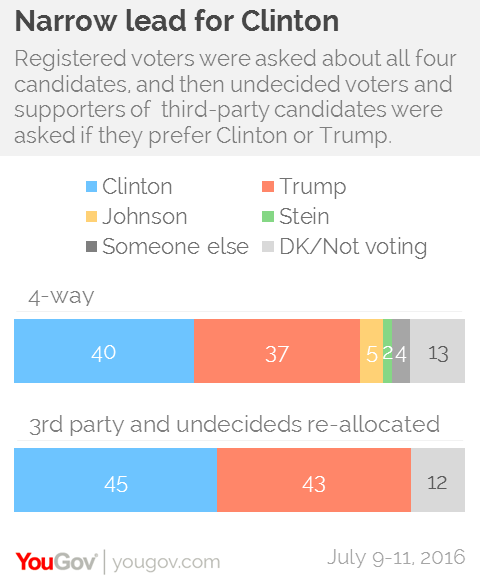 While she is leading Trump in this week’s poll, her margin is extremely narrow, both when third party candidates are included, and when they are not.

Clinton is still nowhere near getting support she needs from Democratic voters who favored Vermont Senator Bernie Sanders during the primary season.   Two in three Sanders supporters say they hav
e an unfavorable opinion of Clinton, and a majority are not yet prepared to vote for her (one in three now say they will vote for someone other than the major party nominees).  When pushed to choose between Clinton and Trump, one in five will not pick either, but Clinton leads Trump 58% to 19% among Sanders supporters overall.  The poll, however, was conducted before Tuesday’s Sanders endorsement of Clinton.  That may move more Sanders voters to vote for Clinton.

While both presumptive nominees have to choose a running mate, Trump’s convention is less than a week away.  While the nominee may not be the most important factor determining people’s votes (just 1% overall say it is), two in three believe it will matter to them.  What do they want? 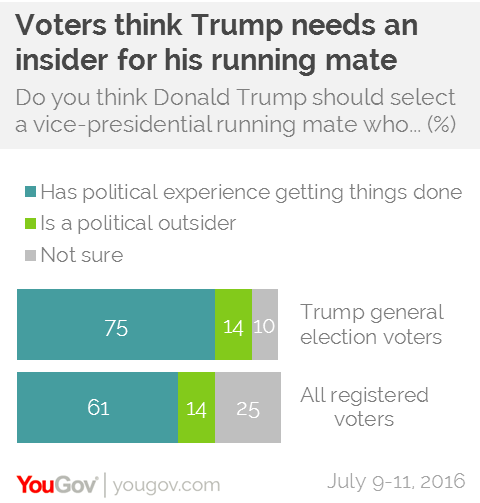 Definitely someone with political experience. Three in four of Trump’s current supporters say their candidate’s running mate needs to be someone who has experience “getting things done in Washington,” and that sentiment is echoed by a majority of the public overall.

As for some other requirements, the public is less clear.  Most Republicans wouldn’t choose between a male or female running mate for Trump, and while a nominee from a battle ground state is preferred, more than four in ten Trump supporters don’t have a preference on that either way.

One thing that a majority of partisans would like to see is someone who appeals to socially conservative voters.  A third would prefer a GOP vice presidential candidate who is a moderate, but far more want a “person of strong faith” who can appear to conservatives. 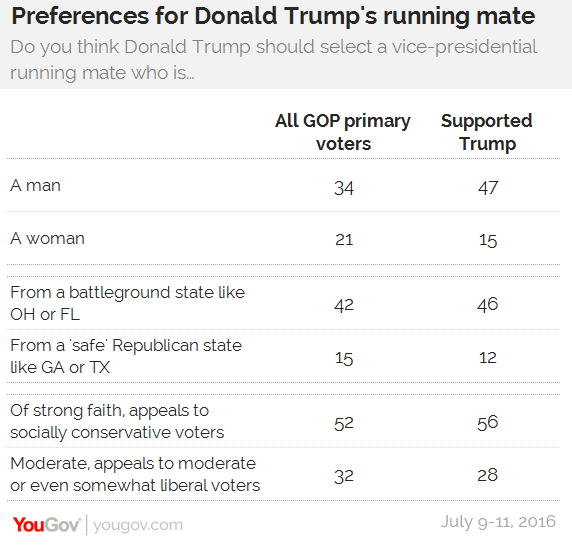 Just about half the public – and nearly a third of Trump supporters – has an unfavorable opinion of Chris Christie.  Gingrich – who was Speaker during the impeachment of President Bill Clinton – is more popular with Trump supporters and Republican voters, although the public overall views him negatively, too.  Gingrich is, however, the only one of the three with long expereince3 in Washington, something that voters say they want.

Pence, the third possibility, is much less well-known than Christie and Trump by Republicans and by the public overall.  He does have support from social conservatives.  Unlike Christie and Gingrich, opinion overall on Pence is divided, and not as negative as it is for Christie and Gingrich.  Republicans generally like Pence, but most don’t have an opinion yet.  Should he be named as Trump’s running mate, opinions about Pence would likely coalesce along partisan lines very quickly.