Most Americans support a single national primary day, and tend to think that the current nomination doesn't produce the best candidates

This year, many – including candidates like Donald Trump and Bernie Sanders – have expressed dismay and even anger at the rules for presidential nominee selection that their respective parties operate under.  Americans mostly agree: in the latest Economist/YouGov Poll, Democrats and Republicans alike would get rid of multiple primary days, and Democrats would ask the unpledged superdelegates – a concept that has been part of Democratic Party rules for more than 30 years – to follow voters’ leads. 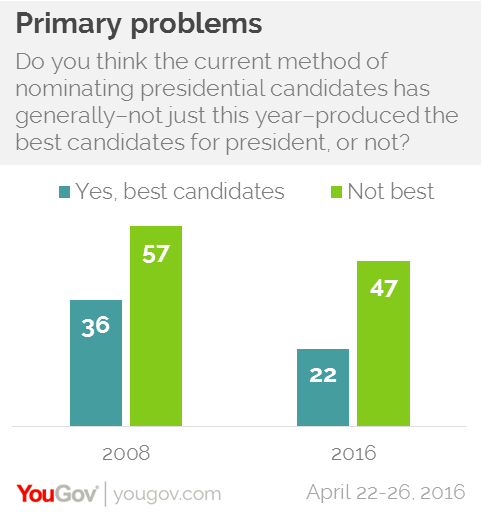 So it may not be a surprise that voters this year – Republican and Democrat are dubious that the current system has generally produced the best candidates.  But that feeling has been around a while.  Eight years ago, at about the same point in the campaign, Americans also doubted the process did a good job at selecting nominees.

Democrats and Republicans felt similarly in 2008, in a polls also conduced while the primary process was in progress.  However, opinion may soften at least a little after the nominees are known: in a July, 2000 CBS News poll, after the nominees were known, the public was split evenly on this question.

What has troubled people for a long time is the calendar of the primary season.  Since at least 1988, Americans have said they prefer a single primary day – not the extended series of primaries and caucuses which this year stretches from February to June.  Democrats and Republicans agree on this principle. 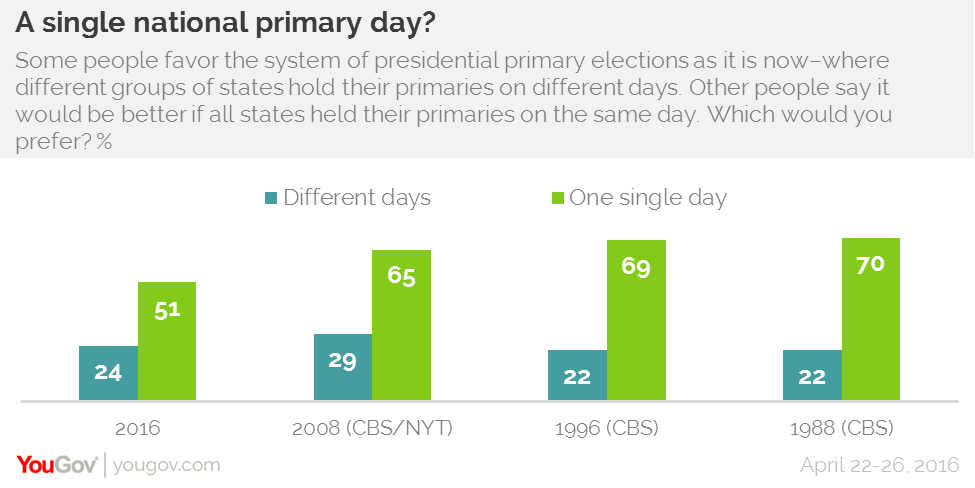 Democratic primary voters are uneasy about their party’s more than 700 superdelegates and their ability to vote for whoever they please.  That concept seems alien to many voters, including those who agree with most of the superdelegates, and favor Hillary Clinton.   Majorities of all Democratic primary voters on both sides of the contest think superdelegates should be required to vote for the candidate who did best in their state.  [That would still give most of them to Hillary Clinton, who has won more, and larger, states than Sanders has.]

There is uneasiness not just about the rules – but also about the parties themselves.  A lot of voters, including many who are voting in each party’s primaries and caucuses, look on the parties as generally corrupt.  57% of GOP primary voters (and even more Trump supporters) say the GOP is corrupt.  The Democratic Party fares a little better – mostly because those voters who prefer Hillary Clinton for the presidential nomination overwhelmingly say the party is not corrupt.  But six in ten Sanders supporters say the party itself is. 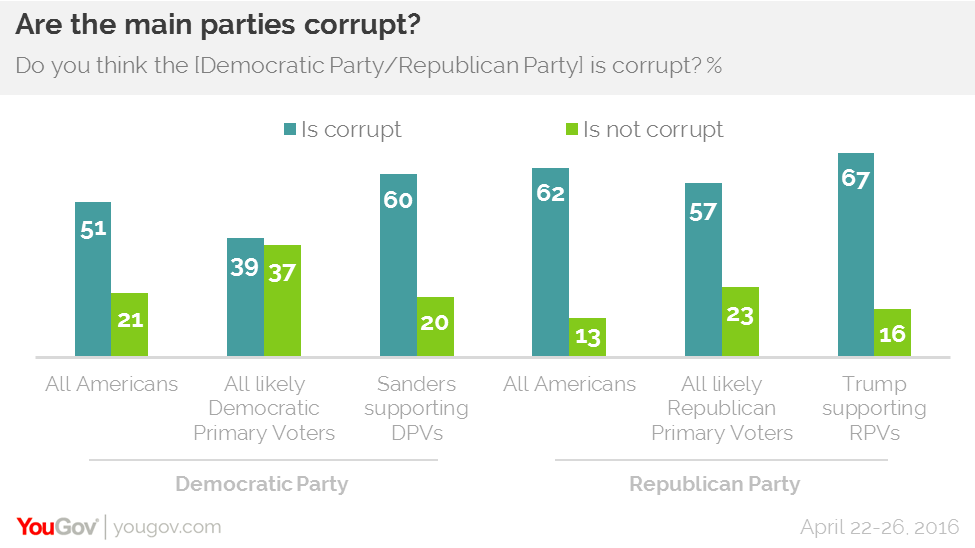 It should be noted that Sanders supporters are also dissatisfied with the way the country as a whole is going. This measure is typically partisan – with judgment closely related to whichever party controls the Presidency.  For example, only 9% of Republican primary voters say the country is going in the right direction.  But Sanders supporters don’t side with their party: Just a third of Sanders voters think the country is headed in the right direction.  More than half say it’s off on the wrong track.