The gender gap – the pattern of men and women differing in their vote intention – first became apparent in the election of 1980, when men were much more likely than women to vote for Republican Ronald Reagan, and women divided evenly between Reagan and then-President Jimmy Carter. The size of the gap has varied from election to election, and was at its highest in 2012.

2016 will be the first time that a presidential election will have a woman at the top of a party’s ticket. How big is the gap today? 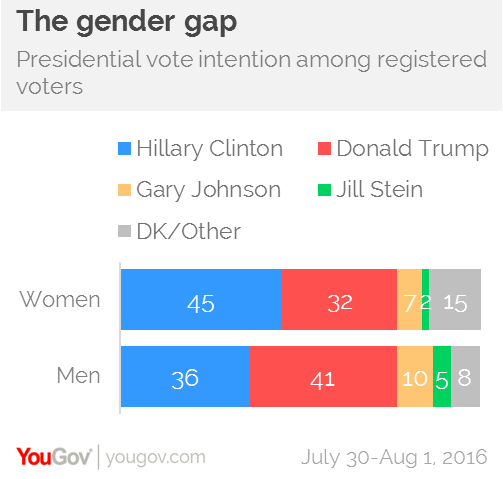 In the latest Economist/YouGov Poll the gender gap among registered voters is sizable. Women give Clinton a 13-point lead, while men favor Trump by five points. Men are also more likely to choose a third party candidate, while women are more likely to say they currently are undecided.

Since 1980, the party identifications of men and women has also become more distinct. Gender differences are especially large among some groups. Women are 14 points more likely this week to describe themselves as Democrats than as Republicans; for men in this week’s poll the difference is only five points. That party breakdown explains much of the gender gap: about eight in ten self-identified Democrats of both sexes say they will vote for Clinton, and about eight in ten of both male and female Republicans say they will vote for her GOP opponent Donald Trump. However, party identification does not explain all the gap. Trump has a double-digit lead with men who call themselves independents; Clinton leads by an even larger margin among independent women. 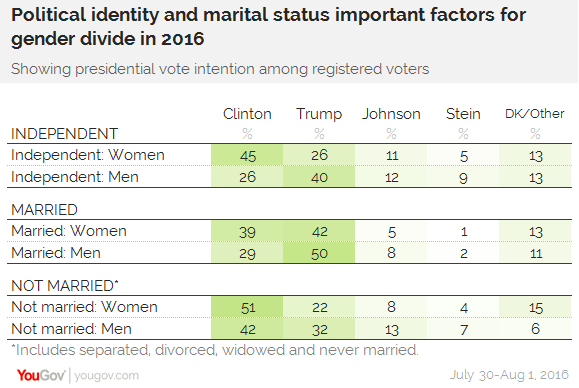 Differences based on party, gender and marital status are not new in American politics. And, according to many people, neither are differences in how men and women are treated when they run for office. They say it is harder for women.

Although majorities see little difference in the willingness of people to contribute to the campaigns of male and female candidates, they do see differences in how women candidates are judged. Just about half say women are treated more harshly by the media than men are, and similar percentages say that also is true in the way male candidates treat their female opponents. 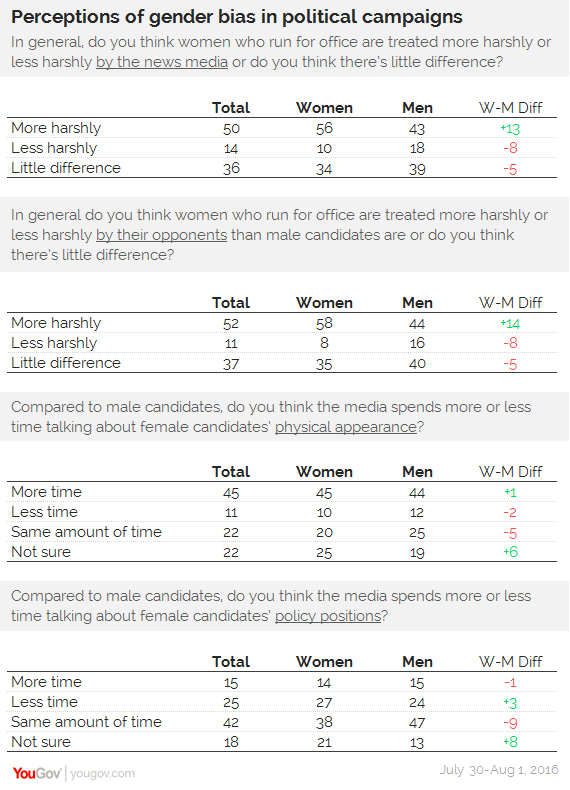 Women are more likely than men to see harsher treated of women candidates. But both men and women see similar levels of potentially unfair treatment when it comes to the amount of media discussion of a woman candidate’s appearance. These questions were meant to be general assessments, and not necessarily measure how Americans see this particular campaign, although this campaign may be affecting answers.

Many other countries have elected women presidents and prime ministers but – up until now – no women had even been nominated by a major party for the job. Why is it harder for a woman?

For most Americans – men and women – the answer is not a lack of qualified women, though some think qualified women won’t run for the job. The largest share say the reason the United States has never elected a women President is the voters’ fault – that in the past, Americans would not vote for a woman. 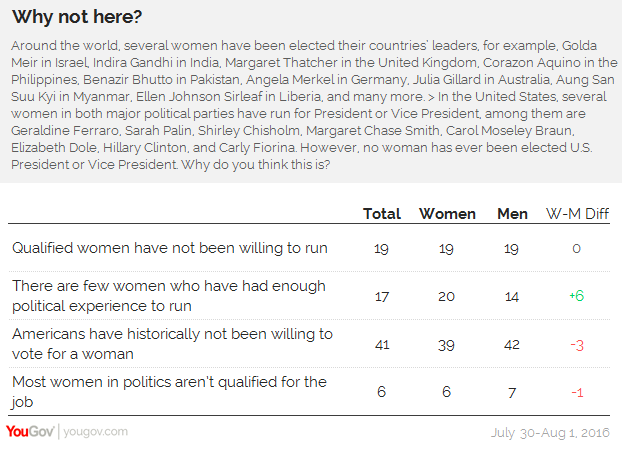