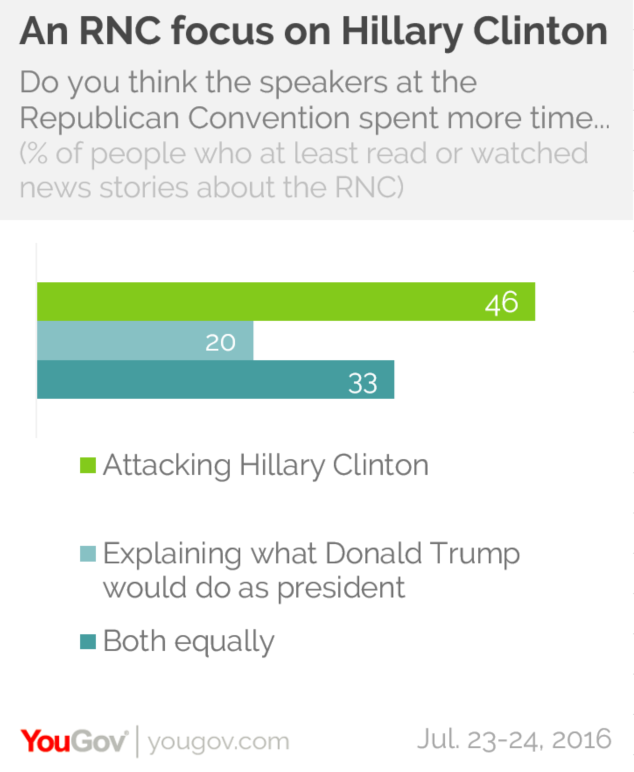 Americans who watched any part of last week’s GOP Convention may have ignored many of the ups and downs of the event, although they grasped one key point: more than twice as many in the latest Economist/YouGov Poll who watched anything at all about the convention said it was more about attacking Hillary Clinton than it was about explaining what Donald Trump would do as President.

But this convention focus appears to have helped Trump relatively little in the race against Clinton: as she did immediately before the convention began, Clinton has small lead over Trump in a four candidate-contest.  And that lead grows when those who select other candidates are asked to choose between Trump and Clinton. 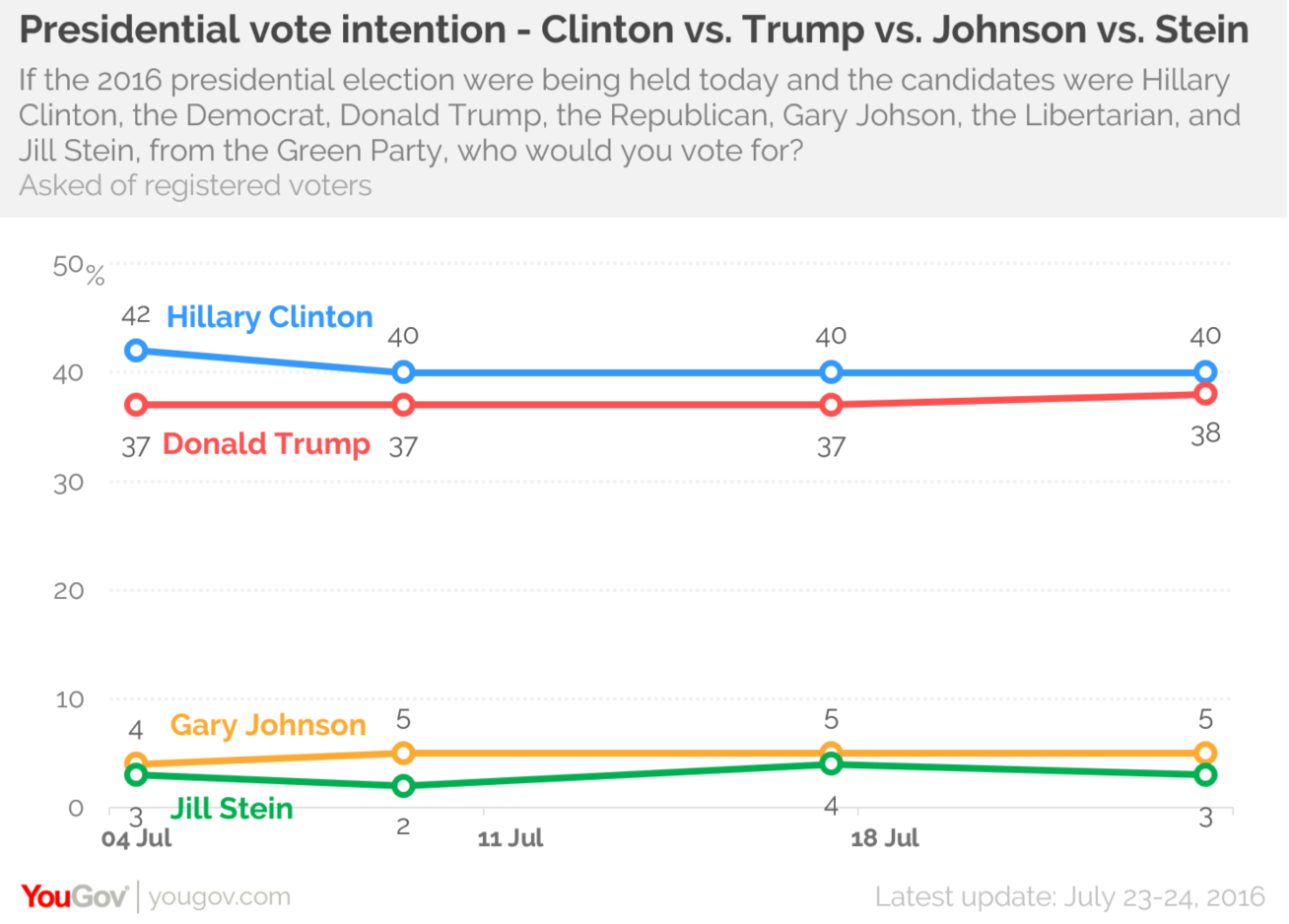 Clinton’s lead over Trump shrank two weeks ago after FBI head James Comey criticized her use of a private email server, calling it “extremely careless.”

When the eight in ten voters who say their minds are made up are asked whom they support, Clinton holds a five-point lead.

One gain this week for Clinton: last week, shortly after Sanders endorsed Clinton, only 44% of those who favored Vermont Senator in the primary said they would vote for Clinton in the four-way contest.  Sanders voters were especially affected by Comey’s castigation of Clinton’s email use).  This week that number rose to 54% (support for Trump in this group dropped from 11% to 5%, and the percentage of Sanders voters favoring Green Party candidate Jill Stein also dropped from 23% before the convention to 12% afterwards).  In the two-way contest, support for Clinton from Sanders supporters jumped 19 points, from 59% to 78%.

There are enormous gender differences in support.  Trump trails Clinton among women by 14 points in the four-way contest.  But Clinton may have a problem attracting votes from men.  Trump has a ten-point lead with them. 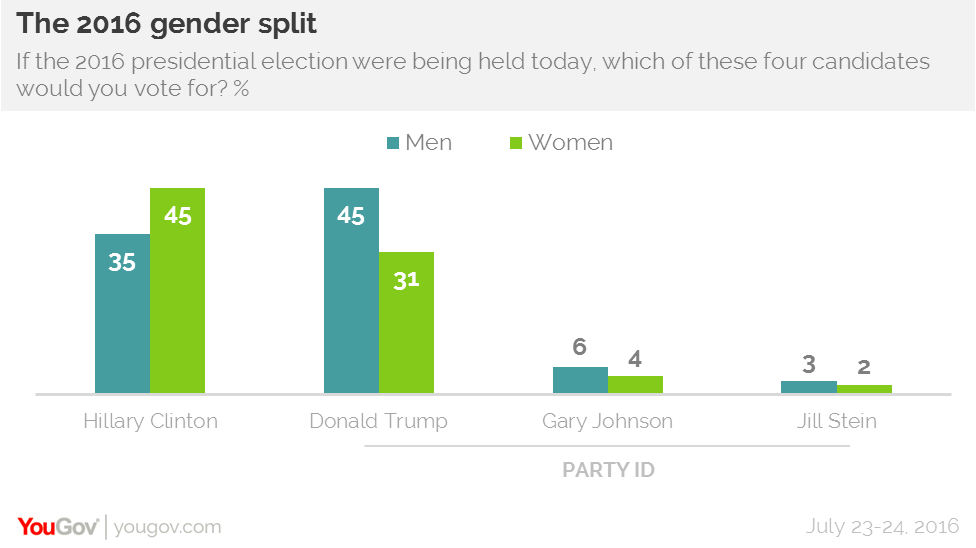 Trump made little headway through his convention getting past was has been his biggest weakness – the fact that a majority of the public thinks he is not qualified for the job.  Those percentages have changed little in the last week.  30% said he had the qualifications to serve last week; this week 32% think that.  As for Clinton, just over half this week and last think she is qualified.

Majorities continue to be uneasy about both candidates: more than half have unfavorable opinions about each one, more than half are uneasy about each one’s ability to handle terrorism.  But majorities do believe each candidate’s major attack on the other: 55% believe the word “corrupt” describes Hillary Clinton, 59% believe the word “dangerous” describes Donald Trump. 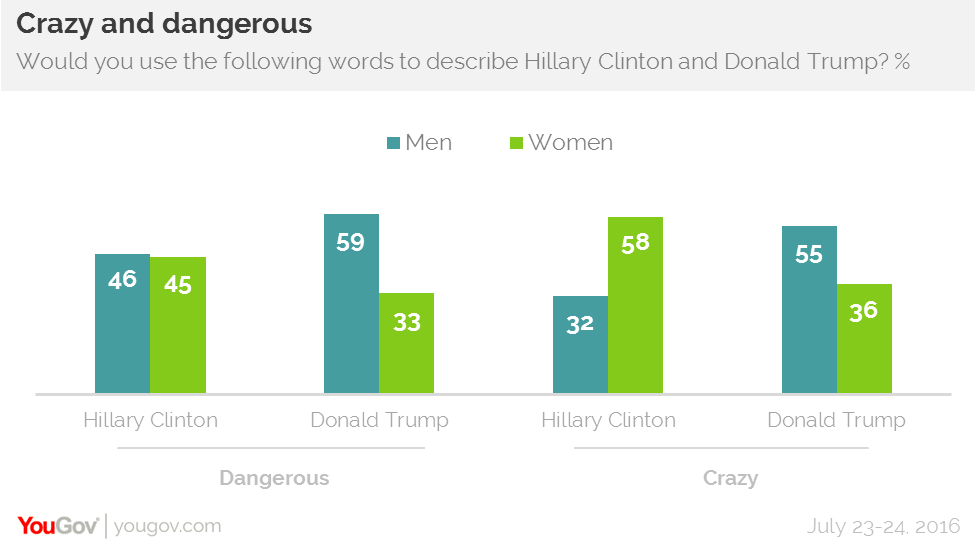 However, nearly half would take each candidate’ attack word and use it to describe the candidate making the attack.

As for convention specifics:

Finally, Ivanka may be the most popular Trump.  Her favorable ratings are higher than those for either her father or her stepmother.