While most American women think that Trump's video apology was not good enough, men tend to either be OK with it or think he had nothing to apologize for in the first place

2016's presidential election had already enjoyed more than its fair share of drama, but last week the race was rocked by new video footage from 2005 which revealed Donald Trump talking about groping and kissing women without their consent, among other lewd comments about women. The revelation, which came days before Sunday's debate, pushed the Republican Party into open civil war and led Donald Trump to make a very rare apology for his behavior, which he dismissed as 'locker room talk'.

Research from YouGov conducted since Sunday's debate shows that 44% of Americans think that Hillary Clinton won this debate, while 32% say Trump won. This 12% margin for Clinton is wider than initial research, conducted immediately after ths debate, which gave Clinton a 5% edge.

During the debates Donald Trump responded to Hillary Clinton's attacks over his admissions of sexual assault by referring to Bill Clinton's former affairs and allegations of rape. Most Americans (55%) think that this response by Trump was inappropriate, a figure that includes 29% of Republicans who believe it was inappropriate to attack Hillary Clinton for her husband's behavior. 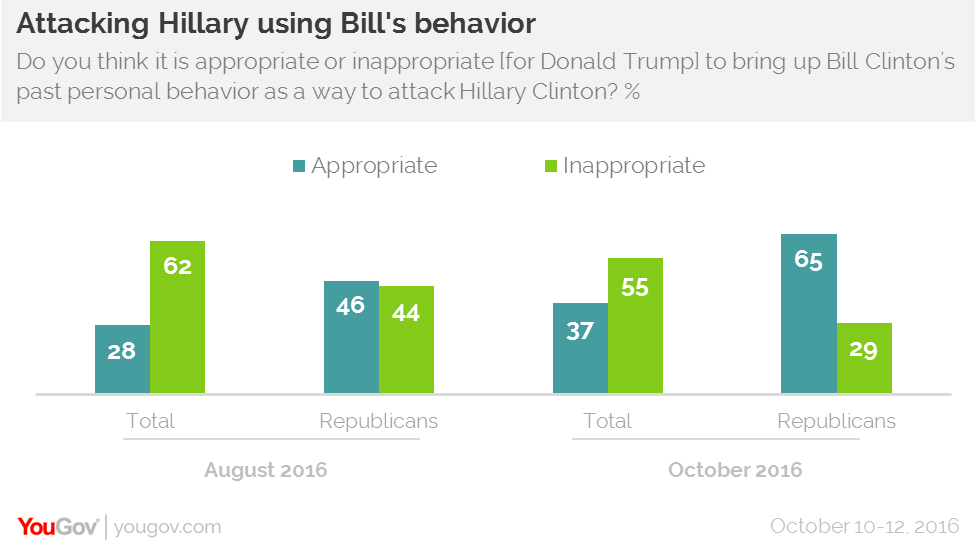