As the two presumptive presidential nominees head to their respective conventions and choose their respective running mates, it’s not clear in the latest Economist/YouGov Poll that there is a vice presidential frontrunner in either party.  No single candidate is the majority choice to join Hillary Clinton or Donald Trump for the fall campaign, though several are at the front of the pack.

Two out of three registered voters say the VP pick is at least somewhat important in their vote – and nearly a third say it’s very important.  Trump supporters and Clinton supporters are equally likely to care about the choice, while those now on the fence or interested in voting for other parties this fall are less likely to care who the major party candidates choose as their running mates.

But issues -- especially economic ones and the threat of terrorism – matter much more.  Just one percent choose the VP choice over any of the critical issues now being discussed in the campaign.

And there is no consensus over who should be chosen as the nominees.  Many of the names now known as being added to the vetting process, like Virginia Democratic Senator Tom Kaine and Tennessee GOP Senator Bob Corker, are unknown to most Americans –and even to most of those currently supporting their respective party’s presumptive nominee.  Others, like New Jersey Democratic Senator Cory Booker, get high marks from Clinton voters, but are still unknown to most of the public. 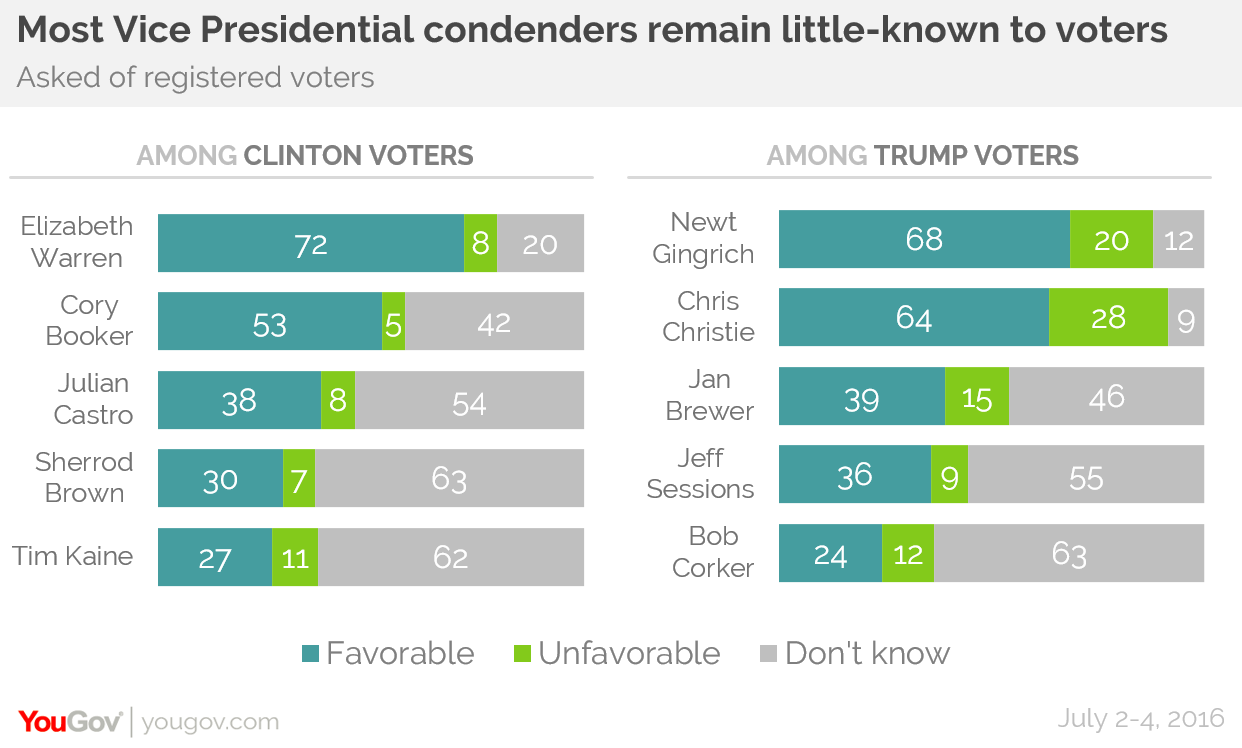 And two Republican possibilities who are well-known, including former House Speaker Newt Gingrich and New Jersey Governor Chris Christie, might be liked by those in their own party, but not by Americans as a whole.

Massachusetts Democratic Senator Elizabeth Warren is known by most Americans, and while opinion overall is closely divided, that’s better than the best-known Republicans manage in this poll.  And Clinton voters overwhelmingly like her.  But she may not bring over all the Democratic primary voters who supported Clinton’s rival, Vermont Senator Bernie Sanders.  One in four of them, twice as many as in early May, have an unfavorable view of Warren today, perhaps because she has endorsed and campaigned with Clinton.

Warren – and Sanders himself – are the most prominent figures mentioned when Clinton supporters were asked whom Clinton should choose as her running mate (when those who favored Sanders in the primaries are asked, Sanders and Warren are both at the top of the list).

On the GOP side, former Speaker Gingrich is by far the most frequently mentioned, followed by Chris Christie.  Other names suggested by Trump’s supporters include others currently being vetted, as well as a few candidates Trump defeated in the primaries and caucuses earlier this year.