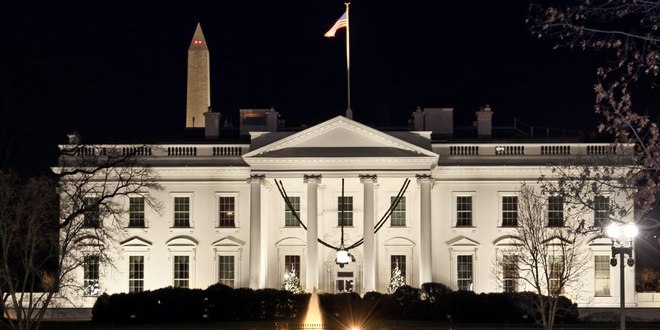 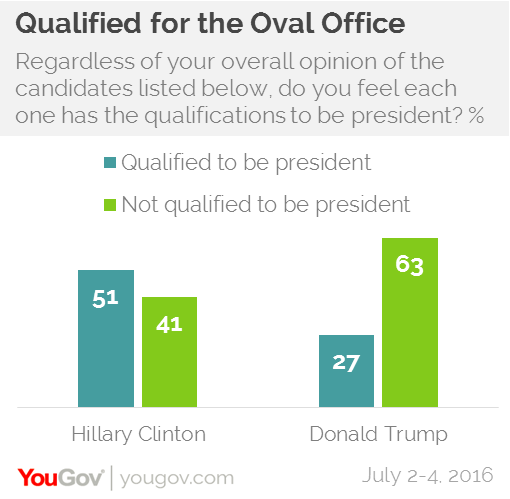 Last week ended badly for the presumptive Democratic nominee, Hillary Clinton.  But even in the Economist/YouGov Poll conducted this weekend, Clinton maintained her five-point lead over Donald Trump, in part because of one basic evaluation: by a wide margin Americans believe that she – and not Trump – has the qualifications for the job.

One in five Republicans agree she is qualified, as do 15% of those who are voting for the New York businessman.  Just 2% of those supporting Clinton think Trump has the qualifications for the job.

This poll, which was conducted after criticism of President Bill Clinton’s private chat with Attorney General Loretta Lynch and as the former Secretary of State met with FBI investigators about her use of a private email server while she was in the Cabinet but before the Federal Bureau of Investigation announced no charges would be filed, indicates that Clinton has huge weaknesses.    Majorities are dubious about her ability to handle key issues, like terrorism and the economy, and just about six in ten think she is not honest and trustworthy.

Four in ten of the people now voting for her are not voting for her, but mostly are voting against Trump.  And a similar number proportion of  Trump’s supporters say they are mainly casting a ballot against Clinton.   So are many of those who say they are supporting one of the third party candidates.

Negative voting is especially common among those who favored Vermont Senator Bernie Sanders for the Democratic nomination.  For those Sanders supporters who, like Sanders, will now vote for Clinton, it’s not because Clinton has brought them into her fold: 71% of former Sanders supporters who will vote for Clinton against Trump are doing it to make sure Trump isn’t elected.

This is a particularly negative year.    No candidate, including Libertarian Gary Johnson and Green Party candidate Jill Stein is seen favorably (though majorities express no opinion about each of those two candidates).   And two in three Americans believe the country is off on the wrong track today – a number which has been increasing in the last year, even as unemployment continues to shrink.

Clinton holds other advantages in the general election contest.  More people not only see her as qualified than think that about Trump, but more also see her as ready to be Commander-in-Chief.  Those “presidential” characteristics also are reflected in the way people view each candidate’s campaign apparatus.  By more than two to one, Americans think Clinton has a well-run campaign.  By nearly the same margin, Americans believe Trump does not.

Nearly a third of Trump’s own voters believe he has a poorly-run campaign.

Trump fares as poorly as Clinton does on questions of honesty.  He does worse than Clinton when the public is asked about how each candidate would handle the economy, terrorism and international trade.  The difference is particularly striking when it comes to trade – on which one might expect the businessman to hold an advantage.  But 61% are uneasy with his ability to deal wisely with international trade.  Less than half say that about Clinton.

Just as she was perceived during the primaries as more electable than her opponent Bernie Sanders, Clinton is perceived as the clear front-runner in the race.  Half the public expects she will win, 22 points more than think Trump will win. 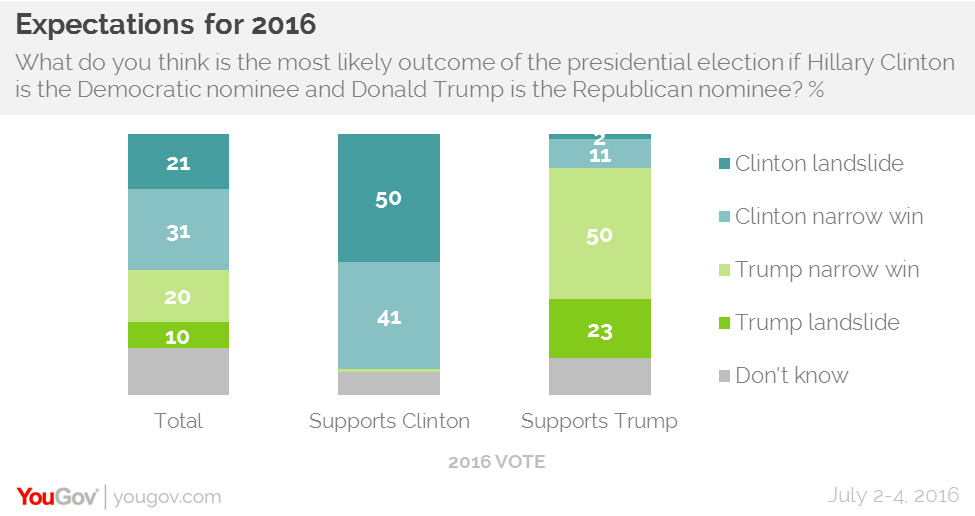 Almost no Clinton voters think she will lose; nearly one in five Trump supporters expect a Clinton win.

But a five-point margin is not insurmountable.  However, it is consistent.  Whether or not one includes third party candidates in the question, the margin does not change.

Last week, with only Libertarian Gary Johnson (and not Green Party candidate Jill Stein) in the question, the margin was similar.

Clinton still needs to solidify the Democratic Party.  In this poll, just 53% of Democratic primary voters who favored the Vermont Senator for the nomination say they will vote for Clinton in a four-way race.  While only 14% would vote for Trump, one in four would choose someone else – and not all of them name either Johnson or Stein.  Many name Sanders himself.  But when they are forced to choose between Clinton and Trump, Clinton’s margin increases.

Trump is even more likely than Clinton to lose those voters who opposed him in the primaries to third parties and others.