Trump still leads the Republican field, but his two remaining opponents have seen a jump in their support and most found his tweet about Heidi Cruz unacceptable

The last two weeks of campaign charges, including the spat over two of the candidate wives and allegations of infidelity (quickly denied) by one of them, appears to have had only limited affect on the overall dynamics of Republican race for president.   Donald Trump is far ahead.   But as the number of competitors has narrowed, so has his overall lead in preference as the preferred choice among GOP primary voters. 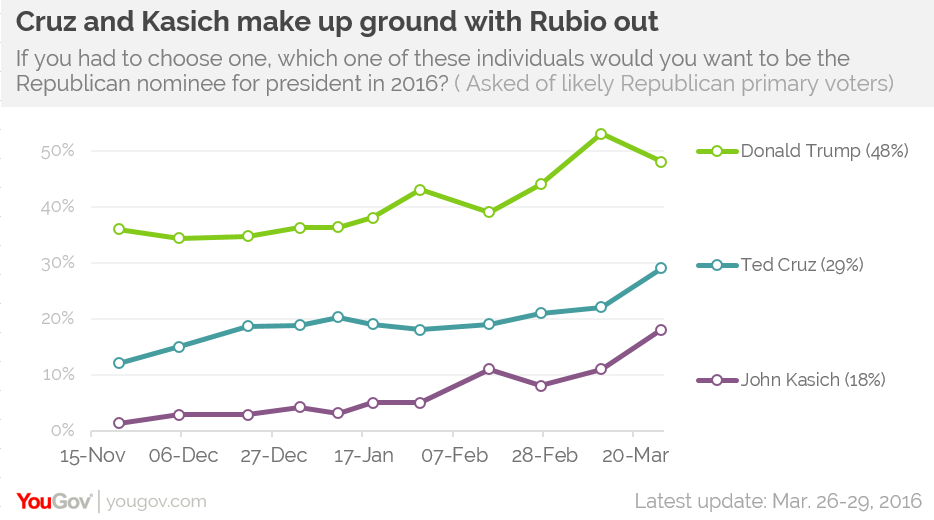 Two weeks ago, Trump captured support from a majority of Republican voters, even against three opponents.  In this week’s Economist/YouGov Poll, his support has slipped back below 50%.  Both Texas Senator Ted Cruz and Ohio Governor John Kasich have gained in the wake of Florida Senator Marco Rubio’s withdrawal from the contest.  But Trump receives just as much support as the two other remaining candidates combined, and continues to dominate.

Both men and women give Trump equal support in this week’s poll.  However, two weeks ago more Republican women than men favored Trump.  His support from women Republican primary voters dropped seven points in the last two weeks.  Cruz and Kasich gained from both men and women. 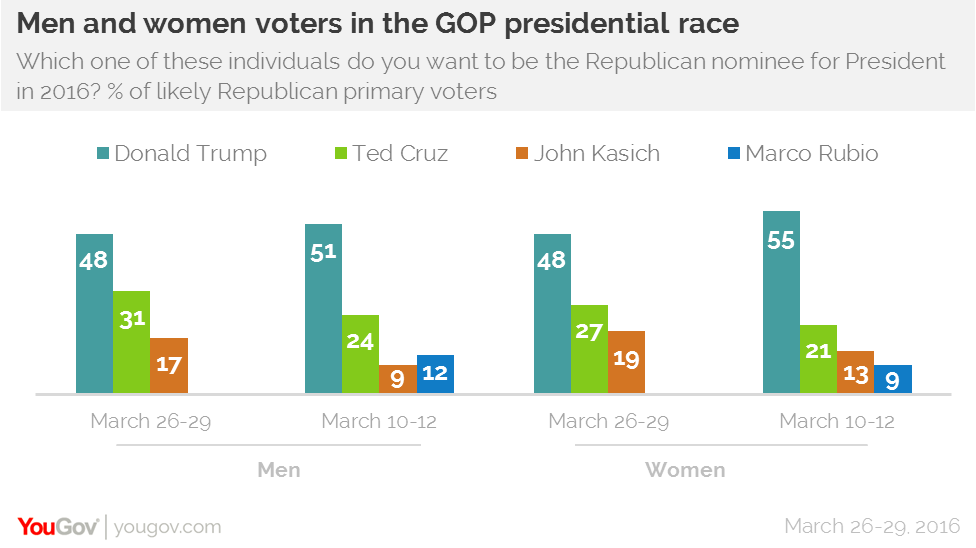 Eight in ten Republican voters, men and women alike, claim that the tweets and the suggestive pictures of Melania Trump won’t matter to them when it comes to supporting Trump.  And both Melania Trump and Heidi Cruz, Ted Cruz’s wife, get positive assessments from GOP voters.  Fewer than one in five rate either spouse unfavorably.  Melania Trump fares somewhat better, but spouses sometimes are judged by the way people feel about the candidates, and Trump continues to be better-liked than Cruz by Republican voters, although the unfavorable ratings for all GOP candidates, especially Kasich (who trails in the poll), have risen in the last two weeks. 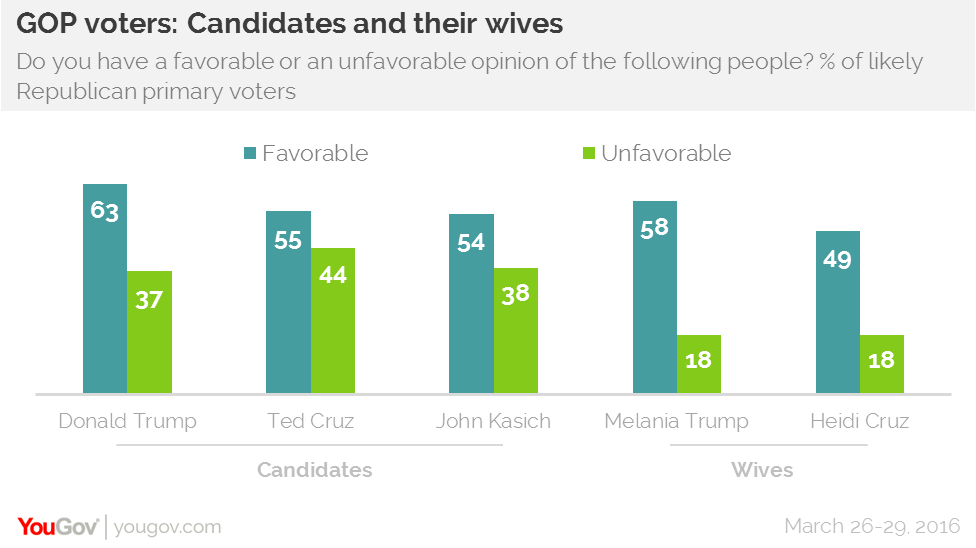 It is a little different among the public overall.  Democrats and independents feel differently from Republican voters about both the candidates and their respective wives.  Nearly two in three adults give Donald Trump a negative rating, and the public is divided when it comes to his spouse.  Nearly as many overall dislike Cruz as dislike Trump.  But his wife is more liked than disliked.  John Kasich, the least popular GOP candidate among his party’s voters, gets the best marks from the public overall (they divide evenly about him). 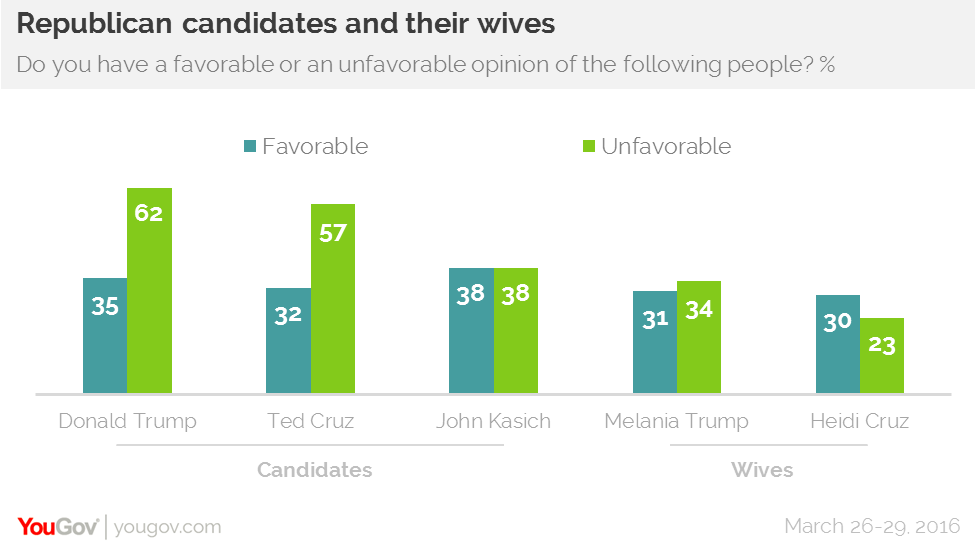 The Trump-Cruz feud was escalating as the poll was in the field over the past weekend, so the poll results may not reflect the complete impact of the struggle.  Nor does it reflect the impact (if any) the charging of Trump’s campaign manager with battery, on the candidate’s support.  That took place after the poll was completed.  But the Trump-Cruz dispute is clearly something most Americans are not happy with.  One thing that most Americans agree on is that Trump’s tweet threatening to “spill the beans” on Heidi Cruz was inappropriate.  However, Trump’s actions gets some support, particularly from about a third of male GOP primary voters, though a majority in that group, like the overall majority, finds the tweet inappropriate. 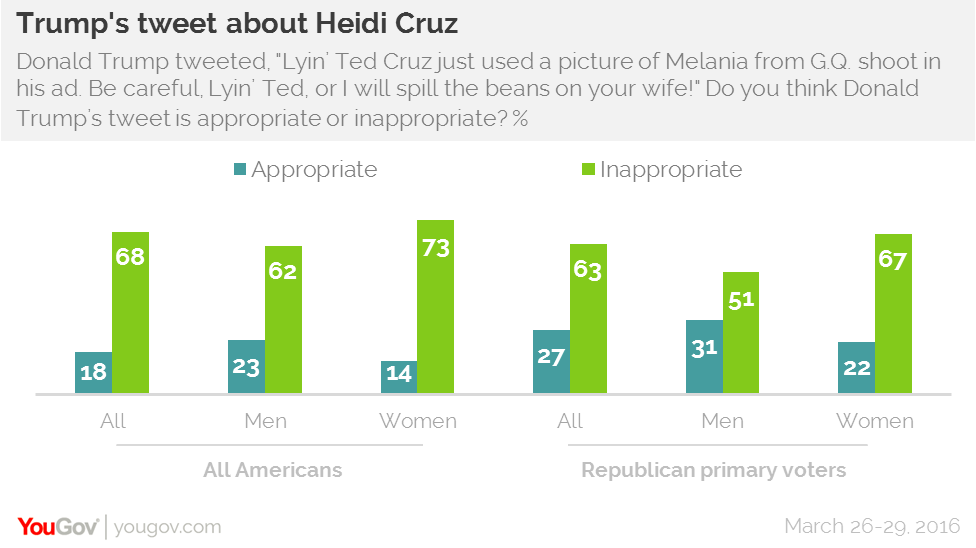